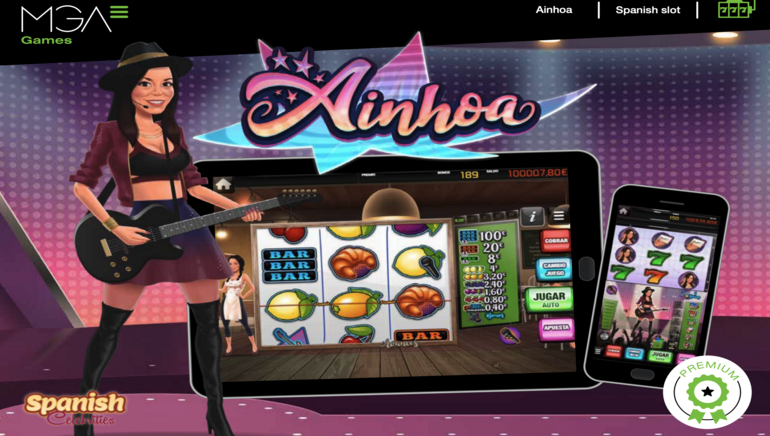 Spin their reels of Ainhoa on mobile devices, the latest video slot from MGA Games, and a fine addition to the celebrated Spanish Celebrities game series.

MGA Games already have an impressive portfolio of slots featuring Spanish celebrities, and they don’t take the foot off the gas. A brand-new game dedicated to Ainhoa Cantalapiedra is available at online casinos powered by this software developer. The protagonist is the winner of the second edition of Operación Triunfo and a celebrated participant in Survivors 2022. If you spin the areas of the slot dedicated to her, you will enjoy a high-paying game with great visuals and sound effects.

Ainhoa is a slot with a classic structure featuring three reels, and it is localized for global operators focusing on the Spanish market. The singer served as a source of inspiration for the latest MGA Games slot, and her beautiful voice will quickly immerse players into the gaming experience. As the reels are set in motion, the unmistakable voice will bring the three areas to life and players will be delighted with unpublished recordings.

Not surprisingly, the symbols populating their areas are also inspired by the world of music, as they include microphones, electric guitars, autographs, and croissants. The game pays tribute to the meteoric rise of the Spanish pop star and celebrates her achievements as an acclaimed music celebrity. The areas are split to highlight her success on the stage and the effort made to reach the top, including her work in the cafeteria.

MGA Games has included five cool mini games in this new slot, each focusing on one of the key aspects of the artist’s life. Players will learn more about her job as a waitress at The Sound, where she performed at night as a singer. The game also highlights the efforts to find sponsorship and the triumph of recording the first album. Finally, the mini-games will focus on her career as a celebrated artist, signing autographs, and collecting prizes at the awards gala.

Ainhoa is a charming slot with colorful background with bright lights, music-style graphics, and a mesmerizing game interface. Players will feel like attending a party while listening to the beautiful voice of one of the best-known and most appreciated Spanish pop stars. MGA Games exceed expectations with this new instalment of the Spanish Celebrities game series released on August 22.