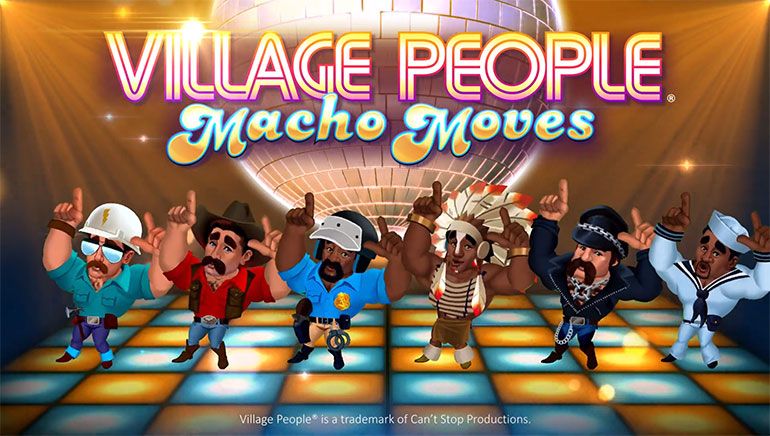 Microgaming has stepped into musical slots with the exclusive June 2019 release of the Village People: Macho Moves.

The 1970s disco group the Village People were renowned for a string of hit singles, including YMCA and In The Navy. Another popular song was Macho Man, and this is relevant because Microgaming casinos have just completed the exclusive June 2019 release of a slot that is officially licensed on the track.

Fortune Factory Studios has collaborated with Microgaming on an exclusive basis, with the Village People: Macho Moves slot not available anywhere else. And those who do play the musical slot will encounter a colourful experience that is playable on either mobile or desktop devices.

Although a colourful slot, Macho Moves has been technically designed. Players will come up against a slot with three rows and six reels – one for each member of the Village People. The base gameplay will call on players to try and line up symbols over the 15 paylines that are integrated.

Fortune Factory Studios has made Macho Moves to accommodate a variety of players, with the wagering starting from a low of only €0.15. Meanwhile, any high rollers who want to go higher can raise the stakes all the way to €25.00 when playing the Macho Moves slot.

Each member of the Village People stands above their respective reels on a light-up meter. It is possible to light the meter by landing VIP wild symbols and gaining tokens. Once five tokens have been gained and the meter is fully lit, this will lead to a special feature being triggered.

Each reel comes with its own feature, starting with five free spins and random 2x to 20x multipliers for the construction worker. Reel two can then added two to 12 wilds to the free spins, while the third can change two to four reels wild. There are further wild reels, moveable wilds, changeable royal symbols, and randomly locked wilds to trigger in the slot.