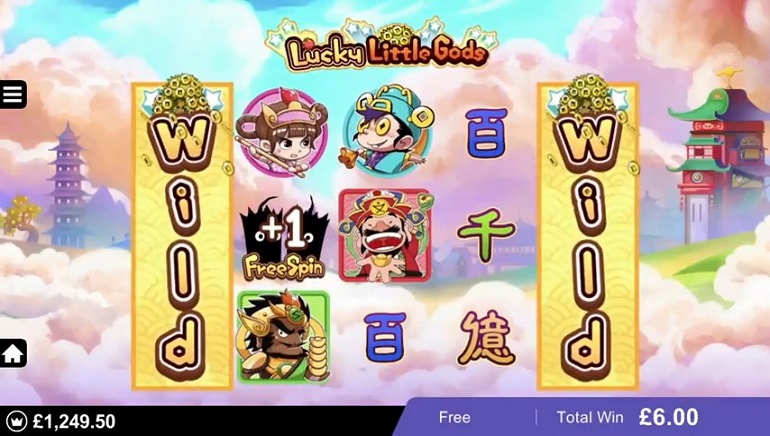 Lucky Little Gods features 243 ways to win and several bonus features including a free spins bonus round where players can land some huge wins.

Microgaming is set to bring some more excitement across their partner casinos with Lucky Little Gods, a brand new online slot set to hit Microgaming online casinos today, just in time for the Chinese New Year. The game is based on the Chinese folklore and mythology and from the information we have so far, it should be a good one.

All the action on the reels takes place in an ethereal world where players are hosted by two gods of fortune. The game features colorful and cartoonish graphics with funny sounds and animations, so Lucky Little Gods slot should provide some good entertainment and nice laughs.

Traditional Chinese music plays in the background throughout the gameplay, accompanied by sounds of firecrackers, dropping coins, and other sound effects helping to create a proper festive atmosphere.

The Lucky Little Gods slot is another 243-ways game and we all know that means there is a potential for some huge wins. Apart from the base game already being funny and exciting, the slot also comes with three special features to keep the players on their toes.

There are two different scatters appearing on the reels. The Golden Tree scatter lands on reels one and five, awarding a coin win, similar to Bust the Bank slot. The other scatter is represented by an animated firecracker and three of them landing anywhere on the reels will trigger the free spins bonus round. The game awards eight free spins with the first and the last reel turning completely wild for the duration of the bonus.

Finally, the Treasure Pot symbol can land on the middle reel, awarding players with a straight-up coin win. Two Little Gods can also materialize on any non-winning spin awarding some extra cash as a consolation prize.

Although it features many elements similar to the Bust the Bank slot, Lucky Little Gods brings out fresh visuals and animations that make this game worth a try. If you enjoy colorful and funny slots, this one will definitely hit home.