Microgaming Gets the Wheel of Wishes Slot Rolling! 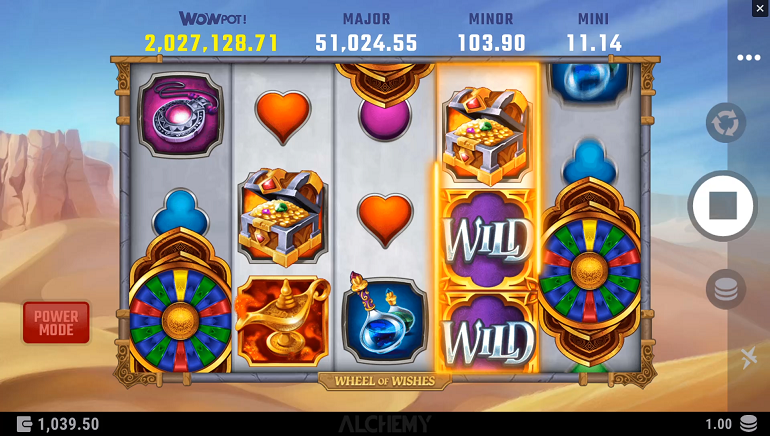 An Arabian-themed slot game, Wheel of Wishes has just been launched by Microgaming. This enthralling 5 reel, 10 payline progressive jackpot slot game is packed with entertaining features and mega jackpot paydays.

The Microgaming progressive jackpot network has already awarded €1.1 billion in payouts since inception, with 79 millionaires crowned in that time. Now, this industry-leading gaming developer has launched Wheel of Wishes slot game to rapturous applause. This Arabian-themed video slot is filled with interactive gaming elements, including enticing audio-visuals, mystical symbols, and magical genies.

Players are treated to a lavish selection of feature-rich elements including a giant wheel symbol which forms during a Power Spin on the 3 x 3 grid. Players will have an opportunity to enter the highly rewarding Wheel of Wishes Jackpot Bonus, where 1 of 4 incredible jackpots stands to be won. These include the mini jackpot, the minor jackpot, the major jackpot, and the reinvigorated WowPot jackpot which seeds at a starting amount of €2 million. The head of Alchemy Gaming – the creators of Wheel of Wishes - Rory Harpur lauded the in-game mechanics of the WowPot Jackpot and its feature-rich elements.

For Microgaming, the release of Wheel of Wishes slot game is a stunning achievement. It marks the culmination of years of industry-leading experience at the forefront of the online gaming arena. The newly revamped WowPot progressive jackpot is packed with fanfare. Players will enjoy a wild selection of Arabian symbols like magical genie lamps buried in a cave of golden treasures. When players land 2+ Scatter wheel symbols, the Power Spin element is unleashed. This transforms Reel 1 and Reel 5 into high-paying stacked symbols, identical in nature.

Wheel of Wishes slot game is a tour de force in interactive entertainment. The game marks the debut of Alchemy Gaming into the big leagues of progressive jackpot games. The reinvigorated WowPot progressive jackpot is said to blaze a trail with players, with cool features like Power Mode and Power Spins to liven up gaming sessions. During an early release of the game, the major progressive jackpot was hit, when a player scooped up €131,574.55. Already payouts across the mini, minor, major and WowPot jackpots  amount to €1.2 million +.