Microgaming Goes Beyond with A Dark Matter 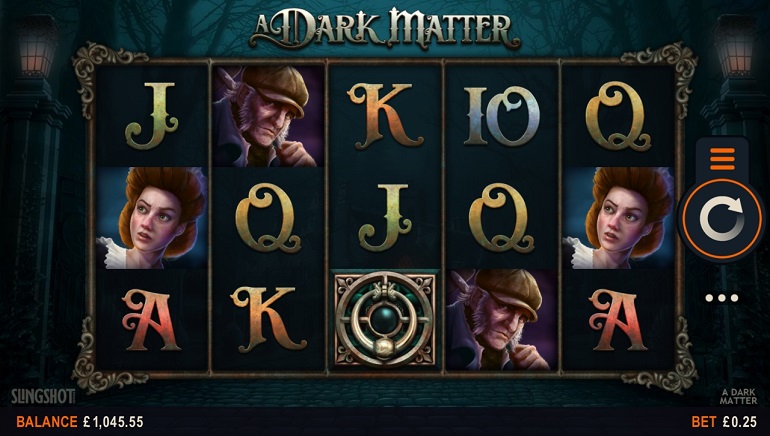 A Dark Matter is the latest foray into the unexplained realm, courtesy of Microgaming and Slingshot Studios. An ominous presence has descended upon Stonehurst, an English town struggling with terrifying disappearances of local residents.

Suspicion has fallen squarely on Wraith Manor, and its bizarre inhabitants. A Dark Matter slot game is a nail-biting entree into an edgy world where Microgaming introduces players to Invading Wilds™, and Bidirectional Paylines.

Mysterious characters adorn the reels as Scotland Yard's finest – Nathan Highmore – embarks upon a sleuthing adventure into the paranormal. Wraith Manor holds many frightful secrets, and it is detective Highmore's job to investigate each and every ethereal element in this ominous village. The game is peppered with supernatural powers as the invading wilds appear on reels 2 or 4.

A Mysterious Presence Has Descended Upon Wraith Manor

These invading wilds have ectoplasmic ability to spill onto adjacent reels, creating a massive paranormal block comprising 6 wild symbols. When these stacked wilds appear on reels 2 & 4 on the same spin, they can join forces to invade the center reel, with 9 wilds offering tremendous potential to players.

The bonus spins element in the game is triggered when 3 x Doorknocker scatters appear during the base game. This automatically grants players entry to the Wraith Manor Lounge with 12 bonus spins.

Every additional scatter symbol that lands indulges players with an additional bonus spin. The musical score creates a grim backdrop for a haunting session of gaming. The game also features a double multiplier which serves to boost performance when the right symbols land on the reels.

This expertly crafted slot game sets the scene with a haunting backdrop, fog, and a shimmering light in Wraith Manor. The deceased Lord of the Manor and his unusual collection of artefacts are the subject of intense scrutiny. Lady Eleonor Wraith is an equally suspicious character with sinister objectives. Players are tasked with assisting detective Nathan Highmore in what promises to be a tour de force in slots entertainment.

A Dark Matter is available in demo mode and real money mode. When gambling for real money, caution is strongly advised. Always establish a gambling budget and never detract from it. Never chase your losses, and if you experience problems quit and seek assistance. Only legal-age players are allowed to gamble for real money.