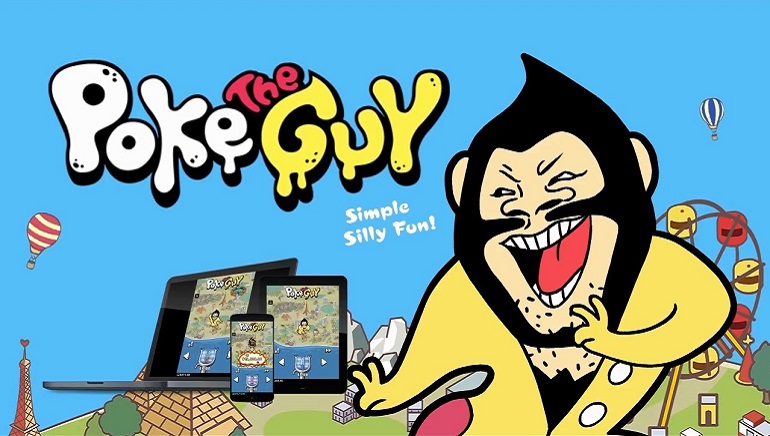 Poke the Guy has no markings of a traditional slot game as it plays entirely like a mini-arcade, providing players with a completely different kind of entertainment.

Although we're used to seeing new slots released all the time, the latest title by Microgaming comes as a real refreshment for the sunny days ahead as their Poke the Guy slot is a slot just in name. With this game, there are no spinning reels, scatters, or free spins to worry about. Instead, it is a lighthearted, silly, and highly entertaining release more similar to simple classic Flash games we all used to play to pass some time.

Player Against the Guy

Like the title suggests, the game pitches you, the player, against The Guy. The Guy is an evil figure who's been terrorizing the city for a while now and it is up to you to try and stop it. But, unlike with most casino slots, you won't be doing it by trying to catch winning combos.

Instead, the screen features a big guy jumping across the screen and your job is to try and hit him with the weapon of your choice to score points and cash. This one really looks more like anything else than a slot, with its cartoonish, goofy graphics and the gameplay you'd expect in an arcade game.

So, with no reels and no symbols to create winning combos, how are the payouts calculated in the Poke the Guy slot? Players have at their disposal an arsenal of weapons, containing weird choices such as rubber ducks, knives, and deadly piranhas. For every throw of the weapon, the bet is set based on your choice but the game also lets you choose the initial bet ranging anywhere from €0.01 to €30.

Although this is definitely the strangest "slot" we've seen released pretty much ever, Poke the Guy can be quite entertaining as it really plays like a mini-arcade. This latest Microgaming release might just be what the doctor ordered for everyone who's grown tired of traditional slots with reels and scatters. This game is anything but!