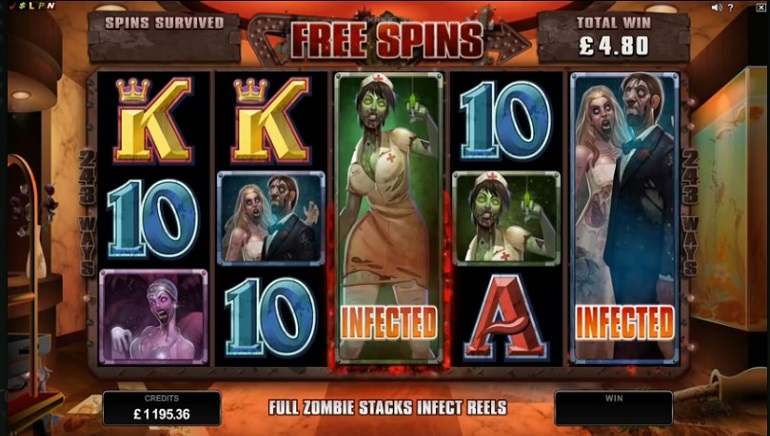 Lost Vegas, new slot by Microgaming, is set to be released in October, featuring an apocalyptic theme of the clash between Zombies and Survivors.

In the wake of yet another Halloween, one of the top casino games providers, Microgaming, will be rolling out their Lost Vegas zombie-themed slot in October. The game promises a lot of fun, as you get to choose which side you want to play, zombies or survivors, with a lot of fun features, exciting soundtrack, and explosive, chilling animations.

The latest slot by Microgaming will feature five reels and 243 paylines. Before you actually start spinning, you get to choose one of the two sides: Zombies or Survivors. While the basic gameplay remains the same, your choice will affect available bonus games as both sides have their own, special features.

Playing on the Survivors side, players will have two bonus features available to them: Zombie Fist of Cash, appearing randomly and awarding straight up cash, and free spins triggered by three hazard symbols (scatters) appearing anywhere on the reels. During free spins, players get 25 low-value symbols (A K Q J 10) stashed, which means these get removed from the board and moved to the survivor's stash (paying cash), and they get substituted with other symbols.

Once you've stashed all 25 symbols, the free spins will end and you will get paid spins winnings & stashed winnings.

If you pick Zombies, bonus games are somewhat different. Instead of Zombie Fist, there is Blackout Bonus, where the reels are scanned for high value symbols and you are awarded cash based on the number of symbols revealed. Free spins feature is triggered the same way as for Survivors, but it plays differently. The reels are infected by zombies, and the infection turn reels into wilds on each spin.

Free spins will end only when all five reels have been infected on a spin (meaning you could end up with five reels full of wilds) or you've played (survived) a total of fifty spins, which will award you a special cash prize.

Apart from a very exciting gameplay, Lost Vegas will feature some very impressive graphics and animations, accompanied by exciting music to keep you on your toes at all times. Bringing explosions, lightnings, blackouts, and some really chilling animations to celebrate your wins, Lost Vegas definitely promises a lot of things to get excited about!

Players can expect to see Lost Vegas at leading Microgaming-powered casinos, brands the likes of Royal Vegas Casino, Platinum Play Casino and others.