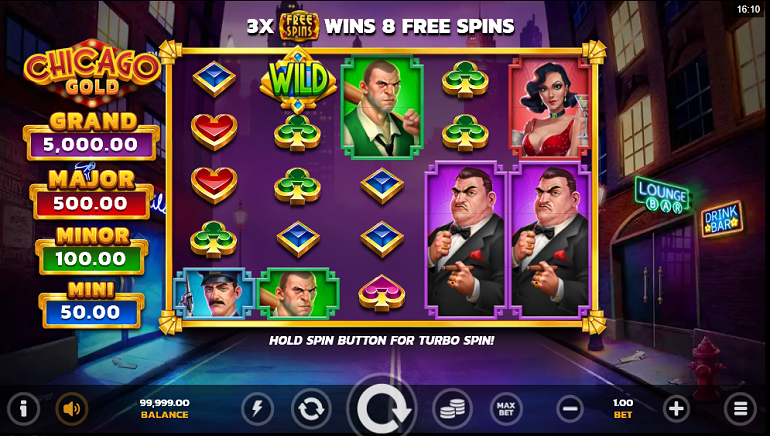 All 20 games are filled with engaging audio-visual elements, in game mechanics, and Vegas-style realism. Among others, players will get to experience brand-new content, with a rogue's gallery featuring pirates, ghouls, gangsters, and jokers. With so much action taking place, winter is going to be a real blast.

Myriad entertaining features will be showcased in grand style with each of Microgaming's 20 February releases. As an industry-leading games developer, Microgaming is revered for exceptional gameplay, and pulse-pounding action.

Leading from the front is the animated mob slot known as Chicago Gold™. This entertaining slot machine game plays out with 5 spinning reels and 20 paylines. Set in the prohibition era of the 1920s, when organized crime syndicates ran amok, Chicago Gold ™ delivers.

Microgaming, along with Just for the Win teamed up to release an exciting new slot game – Juicy Joker Mega Moolah. This is the latest rendition of the world-famous progressive jackpot slots franchise. This sizzling-hot title is all about the bonus game, and the mega thrills of the Jackpot Wheel. When players land 3 Joker symbols, this feature is triggered.

Swashbuckling pirates, treasure chests, rickety old ships, and seafaring adventures are yours to enjoy with Microgaming's brand-new pirate themed slot. Adventures of Doubloon Island™ by Triple Edge Studios and Microgaming features the inimitable HyperHold™ mechanic. Players are thrust into the thick of it, in search of a Pirate’s Booty.

Land 3+ Scatter symbols, and enjoy wins of 2, 15, or even 100 X the total wager. This game also features Free Spins. When you land 6+ HyperHold™ symbols, the HyperHold™ feature is triggered. Players will notice skull symbols on screen, with 1 of 4 jackpots delivering an opportunity to play for the fabled treasure of Doubloon Island.

All That Glitters is 6 Tokens of Gold

Microgaming in partnership with All42 Studios has created a winner with 6 Tokens of Gold. A cut above the rest, this classic slot brings traditional fruit slots to life with a modern day upgrade. This comes in the form of the HyperHold™ mechanic. When players lay 6+ coins on the reels during the base game, or during the Free Spins Round, the Streak Respin Bonus feature is triggered. As a reward, players will receive 3 spins on the reels, featuring blanks and gold coins.

Once players land a gold coin, it gets locked in, and the re-spins get reset to 3. Once all 15 coin positions on the grid have been filled, the Mega Jackpot is yours to enjoy.

Microgaming has partnered with many other independent studios to bring players a fascinating selection of slot machine games during the month of February. These include partnerships with Gacha Games, with Incan Adventure slot, All41 Studios and Ingots of Cai Shen, and Pulse 8 Studios with Carnaval Jackpot.

To round out the month, Microgaming and partners will be releasing Opal Fruits, Fruity Bonanza Scatter Drops™, Reel Diamonds, Temple of Light, Cosmic Gems, Bar Slot, and Yola Berrocal. Combined, these fun-filled online casino games will certainly raise the bar in a big way!