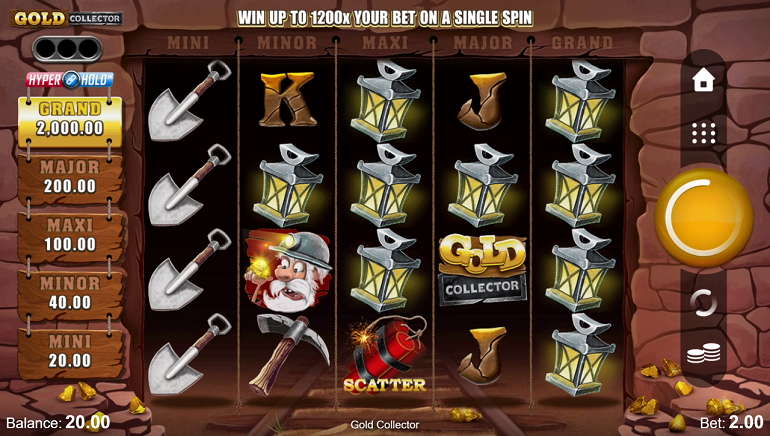 Microgaming is set for a game-rich April with numerous fun and exciting new releases in the pipeline and ready to go live during the month,

As one of the largest and most productive game developers in the industry, Microgaming is never happy to rest on its laurels. Operators and players alike have grown accustomed to seeing several new releases come out of the company's workshop every month, but it seems the month of April will be particularly exciting in this regard. Together with their partner studios, Microgaming has prepared a host of new releases set to hit the virtual shelves of online casinos in coming weeks.

Gold Collector Slot by All41 Studios

The first fresh game to hit the market is Gold Collector developed by All41  Studios. Released on April 6, this slot features cartoonish graphics and the always-popular theme of digging for gold. With symbols such as shovels, dynamites, gold-filled carts, and miners, the game sets up the right atmosphere for the players ready to embark on their quest for riches. There are five distinct jackpots up for grabs as well thanks to the HyperHold feature.

Set to go live on April 13, Queen of Alexandria is another game to join the series of slots featuring the popular WowPot jackpot. Created by Neon Valley Studios, the game is themed after Cleopatra, one of the most famous queens to have ever lived. There is no free spins round but expanding wilds and re-spins are there to help players score some decent wins in the base game. Of course, the main attraction of the Queen of Alexandria slot is the WowPot Bonus Wheel that can trigger on any spin, giving players a shot at one of four progressive jackpots.

Book of King Arthur by JFTW

Just For The Win will surprise players with another slot themed after the fabled king Arthur on April 20. Expanding wilds in the base game and the free spins bonus with a randomly selected scatter symbol create an exciting setup as players set out on their quest to uncover the riches of Avalon.

Get ready for a pirates-inspired adventure with this slot developed by Buck Stakes Entertainment, the latest addition to Microgaming's partner network, set to release on April 22. With up to 117,649 ways to win possible on every spin, firepot bonuses, and free spins with random multipliers, this game is much more than just an eye-candy - a title it definitely deserves thanks to its supreme graphics.

Developed by another Microgaming partner, SpinPlay Games, the 9 Blazing Diamonds slot is based on the classic slots' concept, featuring symbols like 7s, diamonds, bells, bars, and cherries, but packed in modern graphics and offering several exciting features. Landing three wheel scatters triggers the Blazing Wheel feature, where players can win cash prizes and free spins with win multipliers, while shiny diamonds offer instant prizes whenever there are three or more landing anywhere on the reels in the base game and in the bonus. The game will go live on April 27.

The final release for April, Egyptian Tombs will go live on 29th. The slot features a well-known but hugely popular theme of Ancient Egypt and familiar symbols like Cleopatra, Ra, pyramids, scarabs, etc. The bonus feature offers up to 50 free spins, though, and randomly triggered Super Spins add extra symbols to the reels and turn the Ra symbol wild, so the game offers a fair bit of potential for big wins.

If this list isn't impressive enough, there are many more titles coming out from Microgaming's partners in April, including Slots O’Luck, Anna Van Helsing Monster Huntress, Inferno Gladiator, Fu88, Survivor, and Phoenix Inferno.