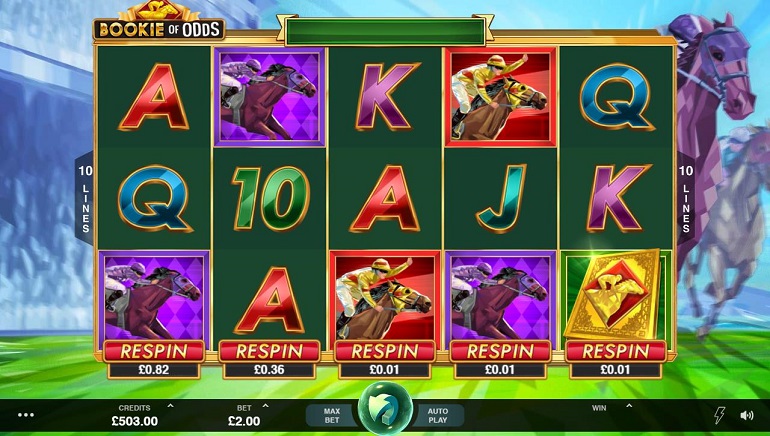 Produced by Triple Edge Studios exclusively for Microgaming, the Bookie of Odds slot takes players to the races, offering a couple of interesting features and the max win of 5,000x the stake.

The cooperation between Microgaming and Triple Edge Studios continues to produce positive results. The latest game to come out of this partnership is the Bookie of Odds slot, offering players a chance to spend a day at the horse races and win some generous prizes in the process.

Triple Edge Studios' latest creation features fairly simple graphics but it still manages to create the proper racetrack atmosphere with symbols such as various horses running, a man in the crowd cheering on his picks, and more. Bookie of Odds also features some great sound effects in the form of race commentary running in the background.

The slot features just 10 paylines but it still has the potential to produce the maximum win of 5,000 times the stake in the bonus round and the special reel re-spin feature adds to the overall excitement and gives players a different way to enjoy this slot.

In the base game, after each spin, players can choose to manually re-spin any individual reel. The price of the re-spin depends on the current stake and, of course, the likelihood of the spin to produce a winning result. This feature adds to the gameplay dynamics as players can, for example, line up the highest paying symbol on four reels and then just chase a single reel to try and get the full line, which pays 500x. Or, they can re-spin one of the reels to try and land the third scatter when there are two already on the reels.

Landing three or more golden book scatters triggers, as usually, the free spins bonus. Players are awarded 10, 12, or 25 free spins, depending on the number of triggering scatters. In the bonus feature, one random symbol is selected to act as an expanding symbol for the duration of free spins.

Although the Book of Odds slot by Microgaming isn't all that unique in terms of the gameplay, its interesting theme as well as the reel re-spin feature should be enough to create some traction with the players and inspire them to try their luck at the races.

Iowa Race All about Casinos