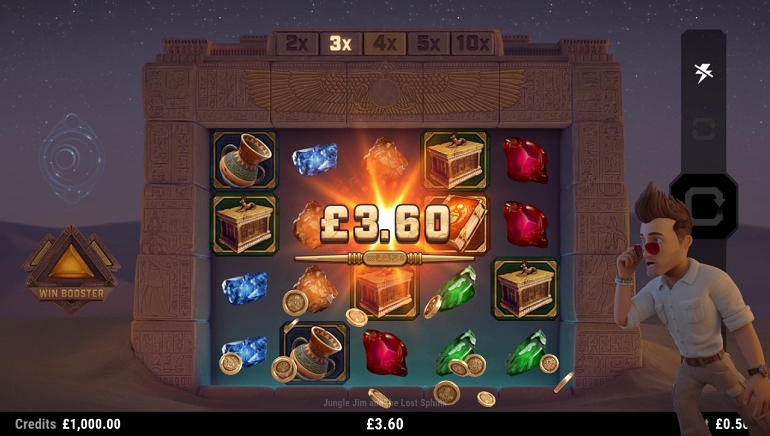 Microgaming is known for introducing an array of fan favourite characters, including Jane Blonde and the ladies from the Girls with Guns slot. Well, the latest character to make a return is Jungle Jim, who first featured in a self-titled entry before truly bursting onto the scene in 2016 release El Dorado.

Next up in the series is Jungle Jim and the Lost Sphinx, which will see Jim swap the leafy jungles of South America for the golden sands of Egypt. Entrusted with this latest entry is Stormcraft Studios, which was behind the development of Dragon Shard and Agent Jane Blonde Returns – another of Microgaming’s top franchises.

The scale is now grander, with the Lost Sphinx adopting a fourth row of symbols to feature over the five reels. With 20 symbol spaces to work with, this enabled Stormcraft to insert 35 paylines for the tense gameplay. According to Microgaming, the maximum winnings can be 6,250x.

Stormcraft has also included Microgaming’s signature Rolling Reels™ feature, whereby symbols drop down free of charge to plus the gaps of winning symbols that disappear. With every consecutive win, this increases the value of the multiplier trail (up to 10x), as dictated by the Win Booster™ function.

It’s all about linking the wins together, as three-straight wins will cause the slot interface to increase and display five reels by five rows. With the extra space available, the paylines increase to 50 and a 4x multiplier is provided.

In addition, three scatter symbols can grant entry to the expanded grid, which will also lead to 12 free spins and access to a multiplier trail that goes to 20x. At this point, look for the golden sphinx symbols to land in the centre, as these will add a multiplier and provide one more spin for the cause.