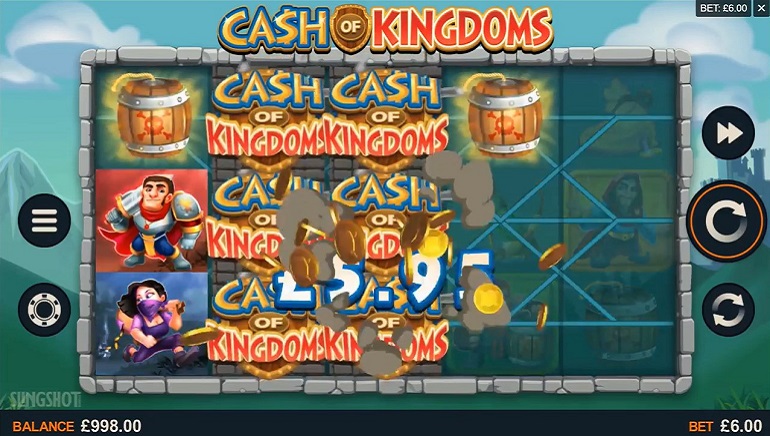 Thanks to the new Invading Wilds feature, the Cash of Kingdoms slot promises a lot of fast-paced action and some great winning opportunities along the way.

Developed by Slingshot Studios exclusively for Microgaming, the new Cash of Kingdoms slot has gone live at a number of online casinos. Initially announced at this year's ICE Totally Gaming, the slot features 15 paylines and some exciting, new features such as Invading Wilds.

In terms of the design, Cash of Kingdoms features cartoonish but very sharp and modern graphics, demonstrating that a simple approach can still be very effective. The game features a medieval theme and all the elements correspond perfectly with this main idea.

The standard 3x5 grid is set on the backdrop of a green meadow with outlines of a large castle in a distance. On the reels, there are characters such as brave knights, damsels in distress, archers, thieves, and wizards, as well as treasure chests, swords, and shields.

Rounding up the atmosphere is the medieval tune playing in the background as the reels spin, taking players back to the period of chivalry and troubadours.

Wild Symbols All Over the Place

Although Cash of Kingdoms features 15 paylines, all wins are paid left to right and right to left, which effectively doubles the amount of winning opportunities. The game is heavily focused on wild symbols, represented by the Cash of Kingdoms of logo, thanks to the Invading Wilds feature.

Thanks to this feature, any wilds landing fully stacked on reels 2 and 4 will "invade" an adjacent reel, spreading over to it and increasing winning opportunities. Landing stacked wilds on both reels will result in the middle reel turning fully wild as well.

Of course, there are free spins, triggered by landing three or more scattered treasure chests symbols. Players are awarded 10 free spins during which wild symbols are super-stacked, which increases the possibility of the Invading Wilds feature being triggered on every spin in the bonus.

Cash of Kingdoms is a result of the exclusive cooperation between Microgaming and Slingshot Studios and should now be available across the network of Microgaming-powered online casinos.