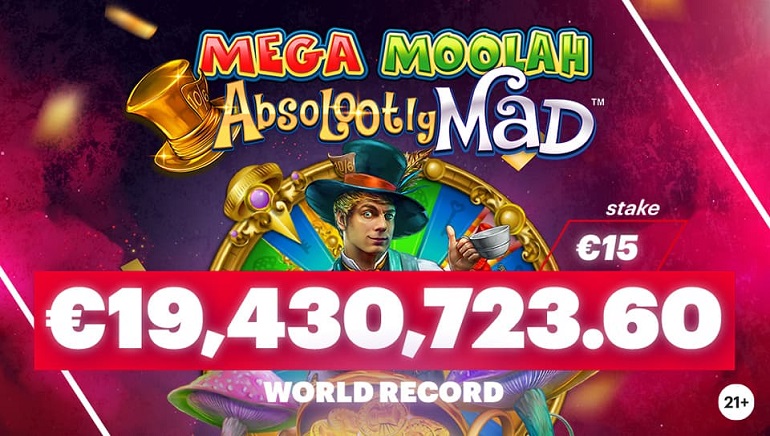 Microgaming has done it again, breaking their own record for the biggest online jackpot payout ever. The new record stands at exactly €19,430,723.60 - the win that's been produced by Absolootly Mad: Mega Moolah, a title developed by Triple Edge Studios and recently included in the large progressive network.

The massive €19,4 million jackpot was triggered on April 27 by a very lucky Belgian players spinning the reels at Napoleon Sports & Casino. Even before this hit, Microgaming was already the proud owner of the largest-ever online casino jackpot, so the company has broken its own record, setting the bar even higher.

It's interesting to note that this win comes on the heels of two large jackpots that were paid just days earlier by the company. On April 14, another lucky player struck gold winning the main WowPot jackpot, Microgaming's latest progressive offering, to the tune of €17.5 million. Just a few days later, another player won the same jackpot, this time around for a "modest" amount of €2,025,000.

Trip Down the Rabbit's Hole

Developed by Triple Edge Studios, Absolootly Mad: Mega Moolah is one of several titles developed by Microgaming's partners to be added to the popular jackpot network. It is an interesting game that takes players on a magical trip down the rabbit's hole themed after the popular story of Alice in Wonderland.

The game offers a number of features, such as rolling reels, win multipliers, and the free spins bonus with boosted multiplier. The biggest appeal, however, is the jackpot feature, which can be triggered on any spin, giving players a chance to win one of four Mega Moolah jackpots.

Including these latest wins, Microgaming has now paid more than €1.3 billion across all of its jackpot games and tires. The Mega Moolah: Absolootly Mad slot alone has produced €46 million in jackpot prizes since its launch a year ago.