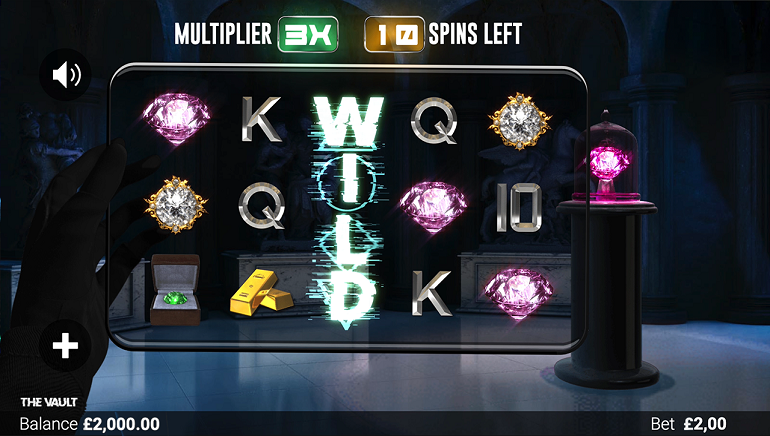 In Snowborn Games' new slot, Jewel, a diamond thief, is on a mission to steal the world’s largest diamond. The game includes wilds, respins, Free Spins, and has a max win of 5000x the initial stake.

Microgaming’s new partner, Snowborn Games, has developed its first slot to be released under the Microgaming portfolio: The Vault. Snowborn Games is based in Stockholm and Helsinki and is made up of a team of experienced and passionate online gaming professionals. The studio’s first slot, The Vault, is a 5-reel, 20-payline slot that’s loaded with intense graphics and has multiple features like multiple wilds, respins, and free spins.

The Vault is a 5-reel, 3-row, 20-payline slot that is playable on all devices. The game has quite a backstory. Jewel, a diamond thief, is on a mission to steal  “The Pink Dawn,” the world’s largest diamond, which is housed in Paris. The diamond is protected by cutting-edge technology, and the game's background includes a laser-filled room that Jewel presumably needs to cut through to get to the diamond.

Bets range between .20 to 20, the RTP is a solid 96 percent, and the hit rate is 19.97 percent. While the numbers seem somewhat gentle, the slot is actually highly volatile.

Symbols include lower-paying 10, J, Q, K, and A royals and higher-paying gold bars, a diamond case, jewel, and the pink diamond itself. The latter, of course, is the highest-paying symbols and awards 100x the stake when 5 land in combination. The wild also pays the same amount for 5 of a kind.

The Vault Bonus can be triggered from the Respins round or from the base game when 5 scatters land in view. Players then get 10 free spins along with a 3x multiplier, which increases by 1x every time a x1 symbol lands. There is also a +1 symbol that awards additional free spins, and there is no limit to how many free spins a player can get. During this round, a second wild appears and completely covers the middle reel.

Snowborn's The Vault offers a sleek design and intriguing backstory, and the features are designed to keep the game interesting. The only touchy aspect of the game is that it is high volatility with a relatively small betting range and a maximum payout of 5000x the initial bet. Not the best combination. Still, Microgaming’s new partner seems to have a lot of potential. If it can continue churning out the high-quality graphics featured in The Vault and make the volatility a little lower, it will indeed be a developer to follow.