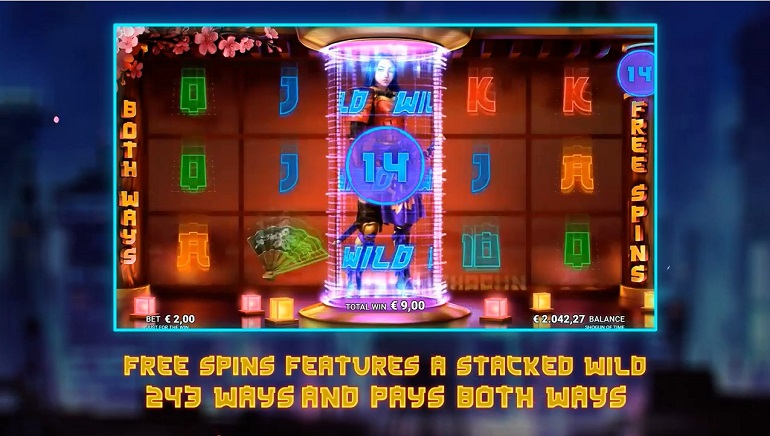 Shogun of time developed by Just for the Win, and released by Microgaming is a fascinating creation. It fuses cyberpunk with Shogun in a dazzling slots masterpiece. Nifty graphics and spectacular audio combine for a tour de force in entertainment!

Releasing today at Microgaming casinos, Shogun of Time slot game takes players on a wild adventure to ancient Japan. This game is a fusion of several elements including cyberpunk and ancient Japan. Shogun of Time plays out on just 4 reels (the base game), allowing for a unique online slots experience. There are 81 paylines in total. Players can up the ante by increasing to 5 paylines with 243 ways to win. This Microgaming video slot game, developed by Just for the Win brings the best of old school Japanese culture to the screen in spectacular fashion. Samurai warriors, traditional Japanese symbols, and cyberpunk elements permeate the game.

The game begins with 4 spinning reels, and 81 lines in play. Luckily, there are mystical elements at work and players can unlock the 5th reel and increase their winning potential with 243 ways to win. Various features and elements present in the game, including Free Spins, Scatter Symbols, Reel Split Re-Spins, and Wilds. The Reel Split Re-Spins increase the number of reels in play, and the number of ways to win. While the free spins feature plays out, the middle reel features a stacked wild which can increase winning combinations.

The maximum win in Shogun of Time slot game is 135,870 coins, and the RTP is listed as 96.02%. Fashioned off the majestic Shogun era, Shogun of Time transcends the ages with classic imagery, Time travel elements, and a whiff of 3D animation without quite getting there. The artwork is expertly crafted, and adds a certain authenticity to this themed attraction. The main features of the game include the Free Spins which are triggered when players land at least 3+ Scatter symbols on the reels.

8 free spins are awarded for 3 Scatter symbols, and 16 Free Spins are awarded for 4 Scatter symbols. Note that there are no Re-Spins of Free Spins. The Reel Split Re-Spin kicks in when 4 symbols form a winning line. When this occurs, an additional reel – the fifth reel – will be added. This increases the number of paylines to 243, up from 81 and 4 reels. Shogun of Time limits bets to $100 per spin, or currency equivalent, but that's plenty for casual players and high rollers alike.

The audio-visual elements of the game are expertly crafted, and they pop. The thematic backdrop is a masterpiece. Players with a penchant for the mighty Samurai Warriors and ancient Japan will enjoy this immersive video slot game. Cyberpunk fans will love cyberpunk girl, and other futuristic, sci-fi elements. It's an age-old game spruced up for a modern audience and the paradox works beautifully.