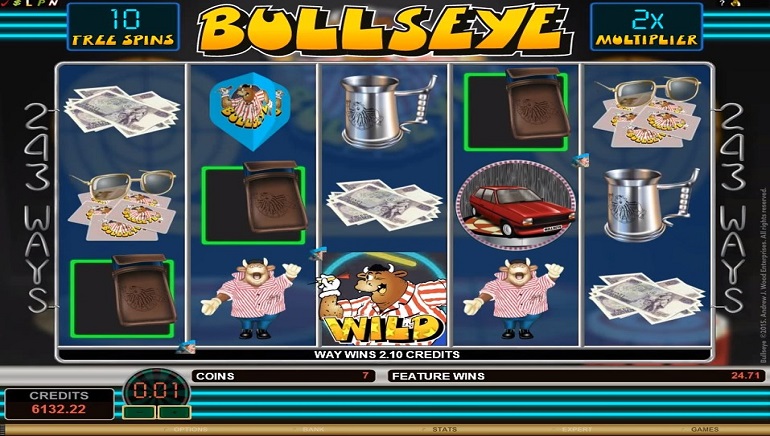 On December 1, Microgaming released its newest slot, Bullseye, a game based on the beloved UK game show, Bullseye. The slot game recreates the game show magic while offering game-show-worthy prizes.

Ready, aim, fire! Microgaming’s newest slot game, Bullseye, has just been released to Microgaming and Quickfire operators, including Gaming Club Casino, Real Deal Bet Casino and 10Bet Casino. The new slot takes it name from the UK's famous 1980s television game show, Bullseye, which was based on the game of darts and involved three pairs of contestants competing against one another for prizes. It ran from 1981 until 1995 and was hosted by comedian Jim Bowen.

Microgaming has managed to capture the thrill of the beloved game show and recreate it as a slot game, available on both desktop and mobile devices. And like the game show, players can test their mettle - and their aim - while competing for many luxurious prizes.

Bullseye is a 5-reel, 3-row slot with 243 ways to win. Symbols include prizes that were often featured on the popular game show, including a speedboat, car and caravan. The dart symbol acts like a wild multiplier during regular play.

When the prize board symbol appears on reels one and five, a special bonus round is triggered, featuring Bully, the game show’s dart-throwing mascot. During the bonus round, players can throw darts at the board for a chance to win prizes worth as much as 15 times the total bet for each thrown dart.

If that isn't enough, when three or more scatter symbols appear on the reels, the free spins bonus is triggered, which happens to be retriggerable. In the free spins bonus, players have all their wins doubled, and an additional scatter pays out between 5 and 100 times the original bet.

Launched in 1994, Microgaming is a world-leading pioneer in the online gaming industry. To date, Microgaming has created over 800 casino games, and is always coming up with new themes and special features for their players' enjoyment.

And Britains Newest Royalty Will Be...