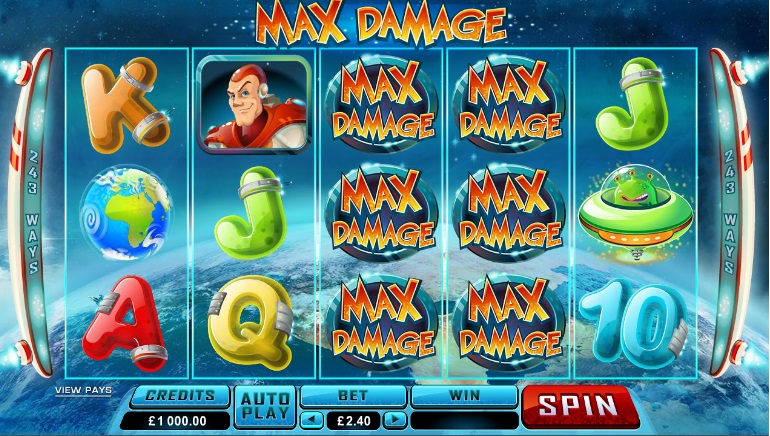 Microgaming's popular Max Damage slot is back and re-released this November to stop the alien invasion that threatens Earth.

In 2012, Microgaming launched Max Damage and the Alien Attack, making it the first ever arcade-style game in the online gambling industry. The game was an instant success as countless players embarked on the mission that spanned nine levels and featured six lives in the attempt to defend planet Earth against the alien invasion.

Now, Microgaming is ready to unveil the next chapter in the Max Damage story with the inter-galactic hero starring in a brand new online slot that will be released in November.

The title has five reels, three rows and 243 ways to win that will surely give players more than enough options to make the most out of every spin. The theme remains similar to the original and the 80s arcade style will continue to be represented in great detail. Furthermore, the updated and vibrant animations will make sure that Max Damage is fairly represented in all its glory as he fights off the alien attack.

Even the soundtrack has a retro style that goes very well with the overall old-school feel about the online slot.

Max Damage also acts as the Wild symbol on the spinning reels and it can be stacked three times in order to send the winnings rocketing towards the sky. Free spins are granted when three or more scatter symbols stop on the screen and these also come with a multiplier to increase the generated winnings. During the free spins, an alien spaceship can stop on any of the reels and thus force Max Damage to enter the fight and destroy the enemy; while of course leaving the spoils of war for the player.

The official launch date for the Max Damage online slot was November 5th and it will quickly make its way to the top online casinos powered by Microgaming and Quickfire. Look for the game at All Slots Casino, BETAT Casino, and bet365 Casino.

NetEnt to Launch MAX to Diversify Volatility in Gaming Portfolio