Microgaming's Titans Of The Sun Hyperion Slot Coming Next Month 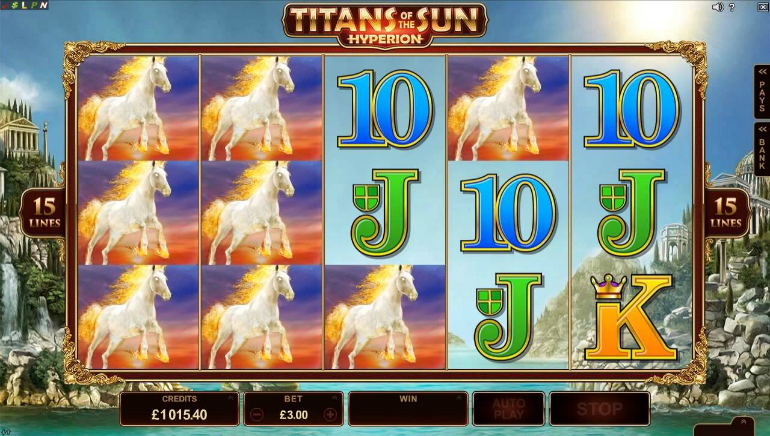 Microgaming are adding a new slot game to their range next month. Titans of the Sun Hyperion , based around Greek mythology, will be available at sites that use their software.

One of the most prolific casino games developers is Microgaming, and they are set to dazzle players in October with the release of their latest game Titans of the Sun Hyperion. Themed around ancient Greek Mythology, it's sure to be a welcome addition to a range that already features hundreds of games.

About Titans of the Sun Hyperion

Hyperion was a Greek God who was revered as the father of the Sun, Moon and Dawn. Now he's the main character of this 5 reel, 15 payline game set in the ancient world and featuring mythological creatures like Pegasus the winged horse a Phoenix and the Sun itself. It all plays out against a background of a coastal Greek city that makes the whole game look very appealing.

Players can wager from as little as 0.15 up to 15.00 per spin, making it suitable for all budgets, while big wins are possible with some of the extra features that come with this game. The Hyperion symbol lands in stacks, and should adjacent reels get covered in multiple images of him, they transform into one big Mega Symbol that can result in multiple wins per spin.

Mystery Symbols can land on the reels, turning into extra Wilds or other high paying icons, while the Lovers Embracing symbol acts as a Scatter to trigger a free spins round. This consists of 15 free games, which can be re-triggered over and over if the Scatter lands in at least three spots at once.

Bigger wins are also possible during the free spins, with up to 5,000x your bet amount to be won throughout the round, compared to 2,000x your bet in the base game. Titans of the Sun Hyperion  is just the first of what is planned to be a range of similar themed slots and will soon be launched at top casinos using Microgaming software including Platinum Play Casino, Crazy Vegas Casino, and Hippozino Casino.

Titan Poker Club One in a Million

Prepare for Adventure in Play'n GO's New Slot, Cat Wilde in the Eclipse of the Sun God