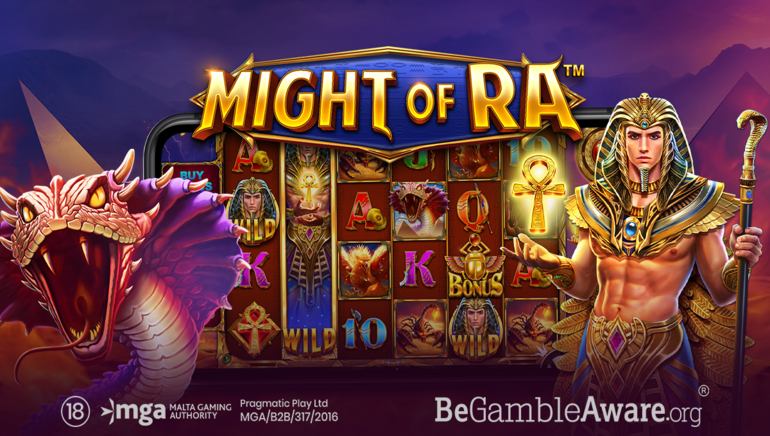 Pragmatic Play unveils its latest Egyptian-themed slot, Might of Ra with top payouts equal to 22,500 times the bet and immersive bonus games.

Pragmatic Play is a leading software developer with a massive portfolio of video slots. Many of its games have unique themes and slots inspired by ancient Egypt that stand out from the crowd. Fans of the genre have another reason to be enthusiastic as Might of Ra is now available at online casinos powered by them. The game takes punters on a virtual trip to ancient Egypt, to explore the realm of the pharaohs. In return, they will be rewarded with epic winnings, when they line up lucky symbols in a winning sequence.

Uncover a Treasure in the Egyptian Tombs

Those who are bold enough as to venture into the Egyptian deserts could find some hidden treasures under the dunes. Might of Ra has six reels and players only need to match at least three symbols to unlock a winning combination. The symbols populating the reels include serpents, scorpions, stallions, and the Phoenix, which are the highest-paying ones. Punters can win up to 15 times the stakes for lining up three such symbols on any pay line.

Just as the name suggests, Might of Ra pays tribute to the God of the sun and the mighty Ra is the wild symbol. It can substitute all the other signs across the reels to produce even more winning combinations and that’s what makes it such a pleasant side. Another symbol that players will be happy to discover is the Golden scarab which triggers the bonus round. It can only pop up on the second, third, fourth, and fifth reels, but when it comes into the spotlight, it produces free spins.

Up to 15 bonus rounds can be unlocked and whenever the Ankh symbol is discovered during free spins players grab bigger rewards. These images are quite lucrative and you can easily track your progress by checking out the meter displayed next to the reels. The best-case scenario is to win a massive amount equal to 22,500 times the investment and even more free spins. This feature can be retriggered by finding additional bonus symbols and this will also produce more free spins.

The software developer has high expectations for this year and its lineup of games is only expected to grow. Might of Ra is their latest slot, but in 2021 the company also released some cool games such as Elemental Gems Megaways™, The Ultimate 5, and Colossal Cash Zone™. Overall, there are more than 500 slots in their portfolio, all developed in HTML 5, therefore perfect for mobile devices.