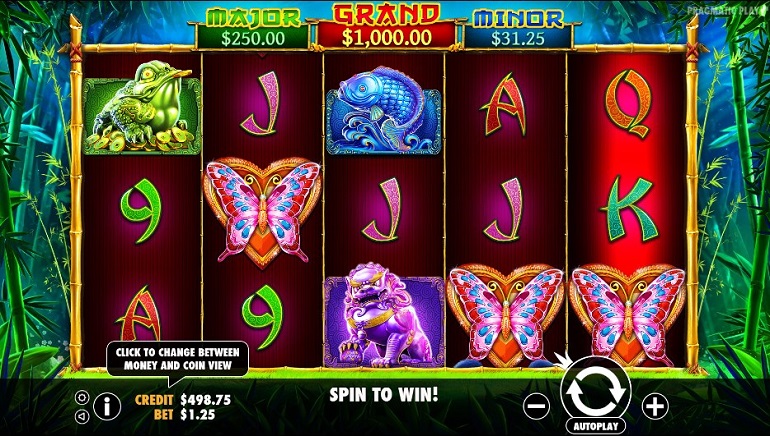 Panda's Fortune features an RTP of 96.17%, 25 paylines, an exciting free spins feature, and three different jackpots that don't seem that hard to get.

Pandas have always been popular in the online realm and, as of late, these cute, curious creatures have been conquering casino slots as well, it seems. We've had quite a few panda-themed titles lately, with the likes of Panda Pow from Lightning Box, Habanero's Panda Panda, and The King Panda from Booming Games. Pragmatic Play is the latest game developer to join the craze with their Panda's Fortune slot.

Rich with Colors and Sounds

The Panda's Fortune slot is set on a backdrop of a lively forest hidden in the depths of Chinese mountains, pandas' natural habitat. Traditional Chinese music playing as you spin the reels helps create a peaceful, serene feeling that is only fitting for this slot.

Reels themselves feature nice, pastel colors, with symbols you'd expect to find if you had a chance to play one or few of the earlier mentioned slots. There are stacked pandas, serving as wild symbols, stylized goldfish, frogs, butterflies, trees, and bonus yin-yang symbols.

When it comes to in-game features, Pragmatic Play's Panda's Fortune isn't overly complex. There are 25 paylines across the standard 5x3 grid, and panda wild symbols stacked on the reels to help create bigger winning combos.

The bonus feature, which is triggered when you land three or more yin-yang scatter symbols anywhere on the reels, awards between 8 and 15 free spins. During free spins, there is a special mystery symbol stacked on the reels, and it can transform randomly into any other symbol (including wilds) at the end of each spin.

Panda's Fortune also features three jackpots, Minor, Major, and Grand, which aren't progressive, but are based on your total bet. To win one of these three jackpots, players need to land certain five-of-a-kind combinations with no wilds substituting and a special golden symbol on the last reel. Jackpots can be won during the free spins feature, which increases the likelihood of a jackpot landing.

Overall, the Panda's Fortune slot is another nice game with beautiful visuals and interesting features and is a good addition to the existing portfolio of panda-themed slots.