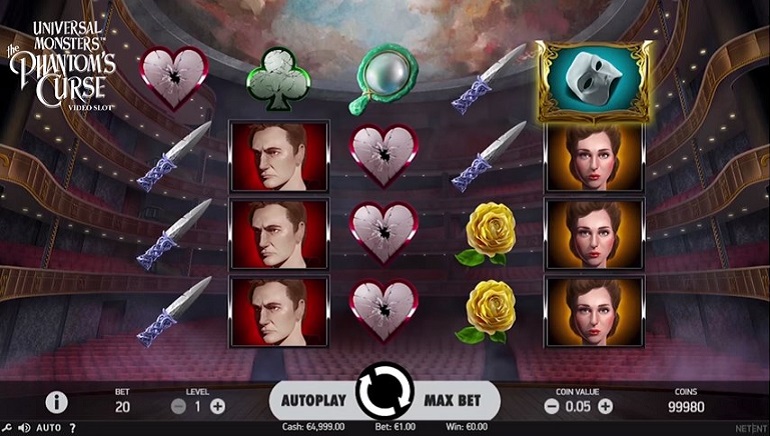 Although The Phantom's Curse slot is still being developed, some early videos gave us a peek into what we might expect once the game finally hits virtual shelves of online casinos. Like with all new games, the slot will be available for play across desktop computers and various mobile devices.

The operatic music playing in the background is the first thing players will notice about The Phantom's Curse as the soundtrack really sets the stage for the gameplay. Set inside the opera house, this slot will also feature some stunning graphics and animated scenes guaranteed to create a truly immersive and engaging experience.

Apart from nice graphics and the overall atmosphere that we've come to expect from NetEnt, the new The Phantom's Curse slot should also come with some interesting and exciting features to give players a chance to create some big wins.

The game is set to feature 40 paylines across the 5x4 grid, with symbols corresponding with the theme, such as the Phantom mask, roses, mirrors, Christine, chandelier scatters, and more. The game pays winning combos both ways as well.

The slot also comes rich in various bonus features. The one that players will probably appreciate the most is the free spins round triggered by three scatters landing on reels 1, 3, and 5. The Phantom symbols plays an important role during the free spins bonus as it acts as a wild and also cuts the ropes the reels are hanging on. Once all five ropes are cut, the feature ends.

Apart from this, The Phantom's Curse will also feature a pick-and-click bonus and masked re-spins, so overall, this is definitely one of the new slots to look forward to in the future. Expect to find the game available at NetEnt-powered online casinos.