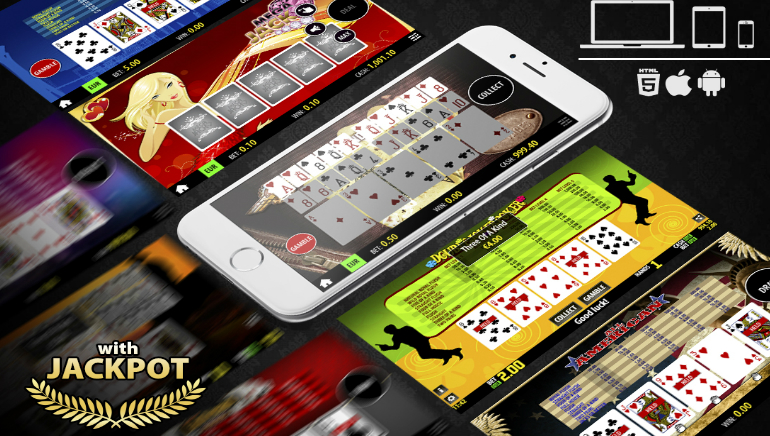 Online casino games developer World Match have released 12 of their top Video Poker titles in HTML5 format for use on mobile devices.

A total of 12 Video Poker games have been adapted for mobile play by the World March developer, with themed titles and many of the most popular formats now available to play across iOS and Android devices.

The games come from their established range which will be familiar to online casino players. Super Las Vegas, The Saloon, Mega Jack, Aces and Faces, Deuces Wild, Jacks or Better, 10's or Better, All American, Double Bonus Poker, Joker Poker Kings, Double Joker Poker and Joker Poker Aces are the games in question, and all are presented in a High Definition format.

Rather than being standard Video Poker games, many of these come with distinct themes and extra features. The Saloon and Deuces Wild for example, are set in the Wild West, Joker Poker Kings sees a cartoon joker overseeing events, while Double Joker Poker has something of a secret agent theme.

What they have in common is the jackpot prizes and careful design that optimises them for use on the smaller screens of mobile devices, with control buttons placed where fingers and thumbs will naturally fall for example.

A useful extra feature is that players can also continue any game across different devices, picking up exactly where they left off.

Commenting on the new releases, Andrea Boratto, Executive Director at World Match said ''This game batch boasts some unique characteristics that no other provider is currently able to offer: it includes all the variants of Video Poker and all the games are equipped with jackpot.''

She added that ''In addition to the choice of different game modes, the chance of scooping conspicuous winnings is a very popular feature that holds a great attraction for players.''

Operating since 2003, World Match now has a portfolio of over 160 slots, 30 table and card games as well as their 12 Video Poker titles.