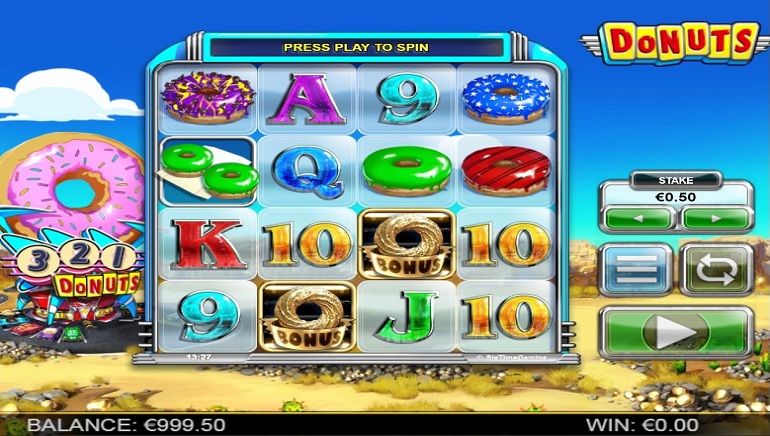 Celebrate all things donuts with this slot from Big Time Gaming. Donuts comes with an array of multipliers and features.

Big Time Gaming casinos have a slot game that could appeal to food lovers. Donuts was released as a celebration of the sweet and doughy treat that is consumed all over the world and is currently available to play.

The scene of Donuts has been set in the middle of desert, but travellers at least have the option of stopping for refreshments at the 321 Donuts shop. This is presented with a sign and a massive pink donut that is displayed to the left of the slot’s playing interface.

Playing with Donuts requires a stake, but this can be set using the horizontal arrows to the right of the playing interface. The minimum value starts from €0.05, while the maximum goes up to €10.00. The actual spinning of the reels can then be controlled using the large green button with the arrow on top.

Winning from Donuts will require that players are able to align symbols in adjacent reels. The donuts have been assigned with the highest values, whereas the playing cards are lower down on the scale. Big Time Gaming has also included special symbols that can be used to trigger features.

The first of those is the wild, giving players a symbol that can substitute for ones that are missing, appearing from the second to fourth reels. There is also the golden donut scatter, which is a bonus symbol. This is designed to trigger 12 or more free spins when three appear. Donut boxes can then hand out multipliers, as can then bonus round mini game.