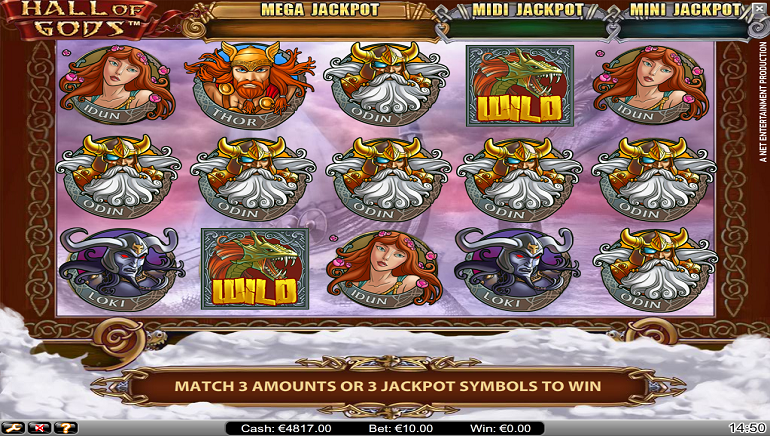 NetEnt’s Hall of Gods slot has seen a huge €7.5 million jackpot won by a Norwegian player during summer 2017.

NetEnt casinos are closing in on €60 million worth of payouts in 2017 alone, but one of the most impressive will go down as the recent success in the Hall of Gods slot. For one lucky player, they are set for a life-changing summer after winning a staggering €7.5 million jackpot in the Norse-themed slot game during July 2017.

After the details were reported, it was revealed that the huge sum was earned by a 47-year-old Norwegian player. This particular individual was playing at a ComeOn! Brand that is called Folkeautomaten, with Hall of Gods being accessed at the desktop casino.

Hall of Gods has a proven track record of delivering payouts, with more than €54 million being awarded from the slot since 2012. In recent times, the previous largest NetEnt windfall was earned on the Mega Fortune Dreams progressive jackpot during December 2016. On that occasion, the jackpot win was ever so slightly lower on €7.4 million.

In Hall of Gods, the slot has been produced with five reels that offer the ability for winnings to be earned on 20 paylines. Obviously, the focus is on the progressive jackpot, and this can be won from the bonus round.

To make it to that round, players will have to land three or more of the hammer bonus symbols. There are three different levels of jackpot to be won, but NetEnt has designed the slot to be easier to win on with higher wagers.

There are other special features to benefit from, such as the expanding wilds that can make an appearance on the second, third, and fourth reels. Hall of Gods will also have the potential for free spins to be awarded. These can potentially be triggered whenever players land enough of the scattered crow symbols in Hall of Gods.

Players can get a taste of Hall of Gods themselves and perhaps hit its jackpot at leading NetEnt-powered casinos like 888 Casino, PlayOJO Casino and Playamo Casino.