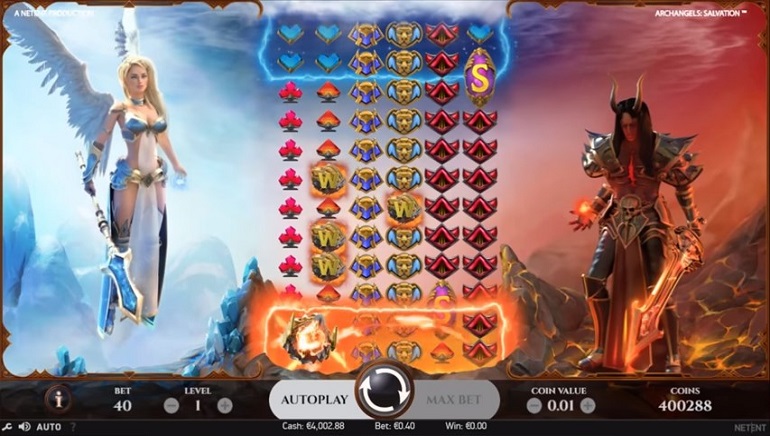 Powerful, flaming graphics, interesting in-game features, and a big number of paylines could help make Archangels: Salvation one of the players' new favorites.

Given the number of years they've been in the market and the amount of slots they produced over those years, one would think we've pretty much seen everything from NetEnt. However, until now, the company had no 100-payline slot machines. This has changed with their latest release, named Archangels: Salvation, featuring 100 paylines across six reels and twelve rows, available from today at NetEnt online casinos.

The company's development team drew the inspiration for the Archangels: Salvation slot from the repeatedly recycled theme of the clash between the forces of light and darkness, good and evil. However, despite the theme itself being somewhat worn out, NetEnt has managed to make the game not just visually impressive but also highly entertaining to play.

Set in a masterfully designed virtual world, with the representatives of both sides standing on the opposite sides of transparent reels, Archangels: Salvation brings out stunning 3D graphics featuring a world that's clearly been tormented by this devastating war between powerful celestial beings.

100 Paylines for the Maximum Action

Apart from the amazing graphics, NetEnt made another important milestone with this game, releasing their very first slot to feature 100 betlines. All symbols are stacked on the reels, which creates potential for some big payouts along the way.

The Archangels: Salvation slot comes equipped with two features, triggered when a wild symbol lands in one of the hot spot areas at the top and at the bottom of the reels. The top area activates the Heaven feature, generating between two and four wild stacks. The Hell feature, triggered by the wild landing in the bottom hot spot area, creates either eight or sixteen singleton wilds on the reels.

Of course, the game also has the free spins feature, activated by three or more scatters landing on the reels. Players can get from 10 all the way up to 25 free spins for landing scatters on all six reels.

NetEnt's Archangels: Salvation is an intriguing game that combines elements from traditional computer games and casino slots, creating an interesting fusion of both worlds. As such, it could receive a great response from the players, especially the new generations who are on the constant lookout for different slots that offer a more exciting and engaging experience.