NetEnt Heads East For The New Who's The Bride? Slot Game 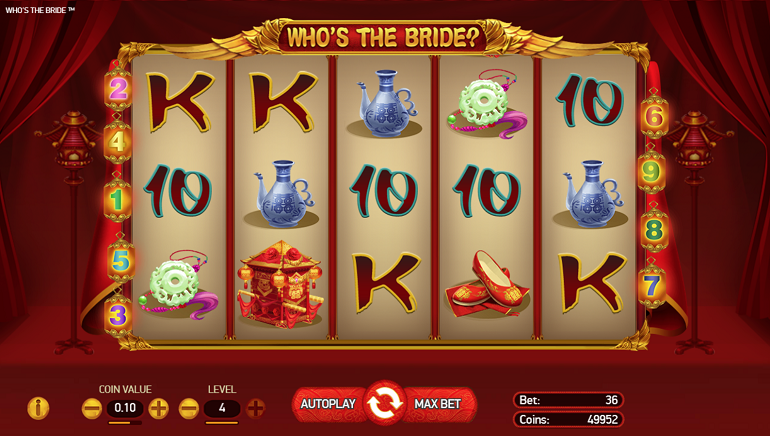 Who's the Bride? is a new NetEnt online slot machine themed around a traditional Chinese wedding, where wild symbols and free games are among the gifts.

Who's the Bride? is a new slot from NetEnt that's based around Chinese wedding customs. The 5 reels feature traditional gifts, such as teapots, jewelry boxes, and shoes, along with a carriage that carries the bride to her big day.

Wild substitutions, plus free games with sticky wilds and win multipliers could give players something to celebrate when they play the Who's the Bride? slot on their desktop or mobile devices.

The Asian style extends to the red curtains that open to reveal the game and the rich gold frame that surrounds the reels. The 5 reels feature 9 paylines, and alongside the higher-paying picture symbols, players will find classic card icons returning the smaller wins.

A bet range of between 0,09 and 18.00 per spin should suit most bankrolls, and Who's the Bride? comes with a generous RTP of 96.87%. It's a high volatility slot machine, which is a popular format in the target Eastern markets.

The shy bride makes an appearance as a wild symbol. She can act as others to complete combinations, also paying out the highest prizes if she crosses a payline with substituting. Players who see the bride right across a line will pick up a win of 1,500x their line stake.

Gold ingots are scatter symbols, valued at up to 2,500x the stake for any 5 or more. Three or more scatters also lead to a free spins feature. An initial 12 free games play out, during which any wilds lock in place for the rest of the feature, plus all wins are doubled in value. The bonus round can be retriggered once more by the appearance of more scatter symbols.

Bryan Upton, NetEnt Director of Games has said of their new release “Who’s the Bride? is a simple, yet beautifully-crafted slot. It’s a perfect union of graphics, sound, and gameplay with high volatility and simple, proven mechanics,”