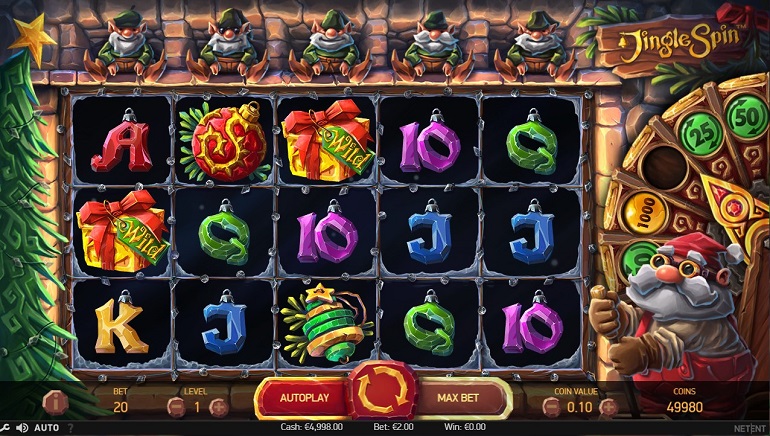 Although the gameplay of Jingle Spin isn't revolutionary in any way, fresh design and holiday theme of the game make it well worth a few spins.

The holiday season is near once again and with it, heaps of new slots featuring Christmas and New Year themes. The latest such creation comes from NetEnt's workshop in the form of their new 20-payline Jingle Spin slot filled with Christmas motifs and familiar holiday tunes.

Reels of NetEnt's latest creation are aptly set on a backdrop of a nicely decorated fireplace, featuring symbols such as stylized reindeer, pine cones, different holiday decorations, and more. To the right of the reels, there is a quirky Santa Claus and his magical wheel, which plays an important role in the gameplay.

Located above the reels is a conveyor belt-like setup, where dwarfs are readily waiting to catch whatever Santa throws at them and potentially reward players with these different gifts. The whole atmosphere is rounded up with a nice holiday tune playing in the background, making Jingle Spin a nice addition to NetEnt's already rich portfolio of Christmas slots, including titles like Secrets of Christmas and Christmas editions of their popular Flowers and Fruit Shop slots.

On every single spin of Jingle Spin, Santa will also spin his wheel. Whatever the wheel stops on (expanding wilds, credit prizes, and free spins) he will throw it over to dwarfs situated on top of the reels and they will carry the bauble for the next few spins until they exit the screen.

For the player to get whatever reward is held by a particular dwarf, they will need to land a wild symbol on the reel above which the dwarf is situated. This dynamic isn't new to NetEnt slot as we've seen it already in their Eggomatic slot but that fact doesn't take anything away from Jingle Spin.

With nice design, funny animations, and engaging gameplay, Jingle Spin will definitely attract many fans of holiday-themed slots. The game is available for play across a number of NetEnt-powered online casinos for those who'd like to give it a try early on.