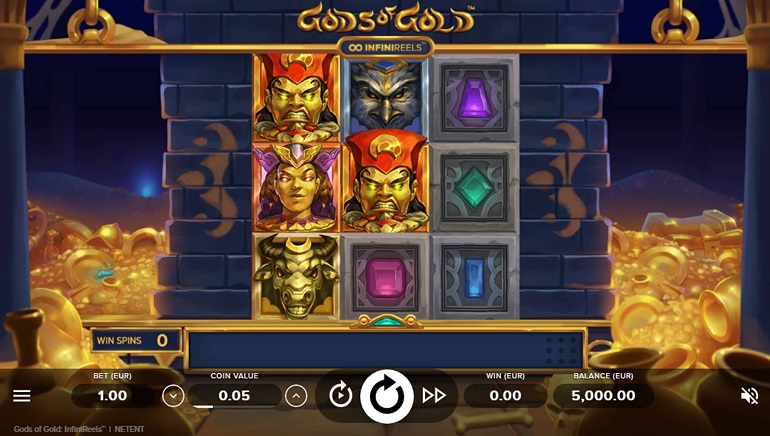 Gods of Gold InfiniReels is a new slot from NetEnt that can see an unlimited number of extra reels added to the basic three.

Gods of Gold: InfiniReels introduces a new payout mechanism to the NetEnt range. The basic 3 reels of this Egyptian-themed game increase during any series of winning spins. It gives players more and more ways to win.

Set in a treasure room, the low-paying symbols are made up of colourful gems, with the faces of 4 characters paying higher prizes. The standard 3x3 reel set has 27 ways to win. On any winning spin, a 4th reel is added on the right. It spins again, and if this adds to the triggering win, a 5th reel appears. Along with longer winning combinations, the InfiniReels feature also adds extra ways to win.

This carries on until a non-winning spin, when all the accumulated prizes from a sequence of infinity reels are paid out. Symbol values double with each additional reel in play, leading to the potential for some massive payouts.

A wild symbol can appear from the 4th reel onwards, and at random, a Multi-Slam feature can add 2 or 3 extra reels instead of 1.

The Gods of Gold: InfiniReels slot also has a Win Spin free games feature, where a prize is guaranteed in each bonus game.

Stakes can range from 0.20 to 100.00 per spin. It's a medium to high variance game with an average RTP of 96.21%. Players can unleash the gods on PCs and mobiles at NetEnt casinos.

Bryan Upton, NetEnt Director of Games said “Gods of Gold: InfiniReels™ is a major release in our roadmap and is the perfect game to premiere our infinite bet ways concept – a mechanic which we have big plans for over the next year. We can’t wait for players to experience the excitement of InfiniReels™ and hope the mechanic will become a true fan favourite of our portfolio as we continue to explore its full potential.”