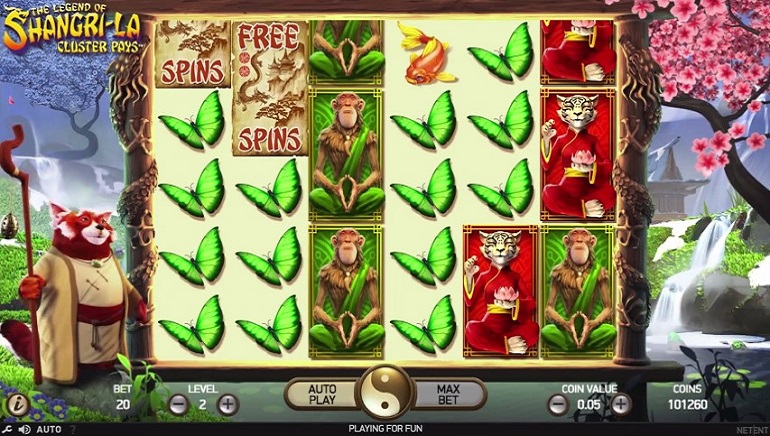 The Legend of Shangri-La features an oriental theme, cluster pays, and plenty of base game and bonus features, offering a thrilling gaming experience.

NetEnt has never been afraid to experiment with their games and try new things, which they've shown once again with their new The Legend of Shangri-La Cluster Pays slot scheduled to appear on online casinos today, September 21. The game draws its theme from the Asian culture with matching symbols and a corresponding sound background, but the style of play and the overall feel aren't characteristic for NetEnt slots. This is good news for all the players out there, of course, showing the company is ready to take on some new challenges and produce even more exciting titles in the future.

Those familiar with the slots' jargon probably know what the "cluster pays" in the name of this game suggests, but for everyone else, this game pays winning combinations regardless of their positions on the reels. As long as the symbols are clustered together, the game will pay according to the paytable.

As expected from NetEnt, this slot comes with some rather stunning graphics accompanied by traditional Chinese music playing in the background. The symbols appearing on the reels include gold fish, butterflies, dragon flies, lotus flowers, as well as three guru symbols, which have a special role in The Legend of Shangri-La. There is also the Substitution Symbol, which acts as this game's wild, changing into an adjacent symbol in the cluster to form a winning combination.

Free spins are triggered by landing three or more Free Spins symbols on the reels, and the number of free rounds depends on the number of symbols appearing in the base game. During the bonus round, Substitution Symbols are randomly added and removed from the reels, creating big winning opportunities.

There are also many features active during the base game including sticky re-spins, which trigger when two non-paying clusters of the same symbol appear on the reels. The Nudge feature can help you get into the Free Spins round if you happen to just miss it.

Overall, The Legend of Shangri-La Cluster Pays slot is an entertaining game that offers a lot and has a potential to become a new players' favorite. If you'd like to give it a try, you can already find it at a number of NetEnt-powered casinos.