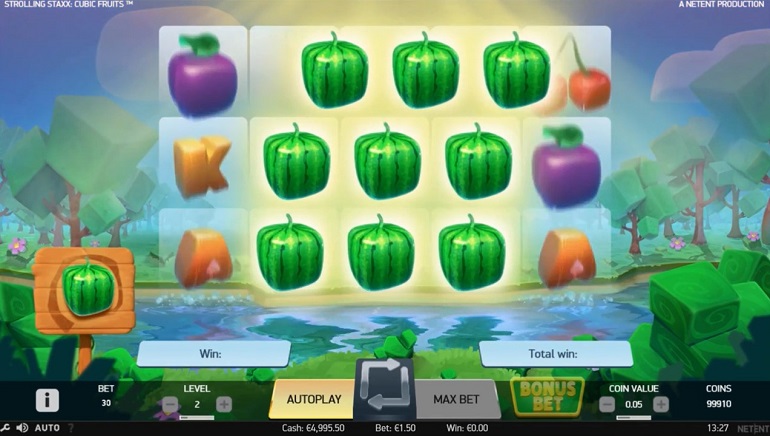 Strolling Staxx is the latest installment of the Staxx series of slot machine games. This thrill-a-minute slot is filled with bonuses and added extras. Get ready to win up to 5000 X your bet!

Leading game maker, NetEnt is rolling out one of its most ambitious slots yet – Strolling Staxx. 2019 promises to be another spectacular year for Net Entertainment, and it gets going with this slots wunderkind. Strolling Staxx will be blazing a trail across the web on January 24, 2019. This epic slot game is the third in a series which now includes Butterfly Staxx and Neon Staxx. These intricately detailed slots games captivated players around the world and the latest version is sure to fire things up for fans.

Strolling Staxx slot is peppered with rich features, and they come with mega-money payout potential. Among the most notable elements in the game are the Colossal Symbols, Bonus Bets, and much more. Coming from a long line of predecessors, one can only assume that this particular slots series has plenty of appeal with players. On the surface, the game appears to be a Nintendo-style game. The audio-visuals mimic the best of the Super Mario Bros games, but this is a true slot game through and through.

Naturally, fans of erstwhile Nintendo-era games will love Strolling Staxx slot game. It’s fun and cheerful, and bursting with fanfare. Regardless, it’s part of the Staxx series of slot machine games and that much is evident throughout the gameplay. With 5 spinning reels, 3 rows, and 10 fixed lines in play, it’s quite a different looking slot to Neon Staxx slot and Butterfly Staxx slot game. This slot game runs on HTML5 and accepts wagers from as little as €0.15 through €300 per spin.

Win up to 5000 X Your Bet with Strolling Staxx Slot

The high paying symbols include the Golden W, the Watermelon, the Strawberry, the Lemon and the Cherries. The low-paying symbols include the Jack, Queen, King and Ace symbols. The Golden W (Wild) symbol pays handsomely when 5 of them appear on the reels. Among the many exciting features players can expect are re-spins, Extra Chance, and Bonus Bets. Players can win life-changing sums of cash with 333 X, 500 X or even 5,000 X the bet placed.