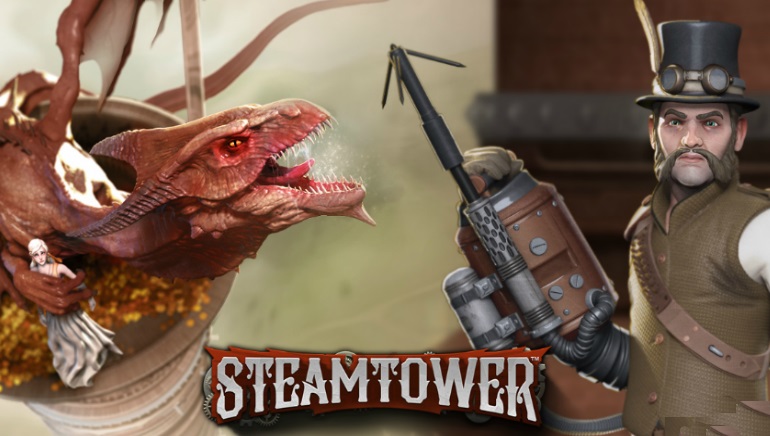 NetEnt's newly released Steam Tower is a steampunk adventure with engaging gameplay that integrates free spins into the action.

Software developer Net Entertainment is not resting after last month's release of Tornado: Farm Escape. NetEnt has released yet another new game, Steam Tower, which is available on desktops and on NetEnt's Touch mobile portfolio with support for iOS, Android and Windows Phone.

NetEnt's slots are well-known for their creative and original themes, and the case is not different with Steam Tower which explores the steampunk genre which has been growing in mainstream popularity in the last few years. Built on 5 reels, 3 lines and 15 paylines, Steam Tower takes place in a stylish 19th century industrialized Victorian setting. Players take on the role of the hero, a bearded-chin-shaved fellow equipped with a futuristic grappling hook that he uses to climb a tall steam tower. His goal: to rescue a princess from an evil dragon, stranded on top.

Climb the Tower with Free Spins

Free spins in Steam Tower are an integral part of the game: Landing a stacked wild representing the main hero activates 10 free spins in which players climb the tower's 16 floors. Every set of floors has different multipliers, with 7x being the max when players reach the 16th floor– including a reward of 1,000 coins multiplied by the player's bet level for reaching the top.

The hero's grappling hook serves as Steam Tower's wild which substitutes for all symbols. One or more of these appearing during a free spin gives players 2 additional free spins and launches up to the next floor. Throughout their ascension, players know exactly where they are using a floor meter. The way in which free spins are integrated into the flow of Steam Tower makes for a very fun gameplay experience.

Steam Tower can be played at recommended online casinos powered by NetEnt like BETAT Casino, Winner Casino and Casino Cruise.

The Best Roulette Games at 888 Casino