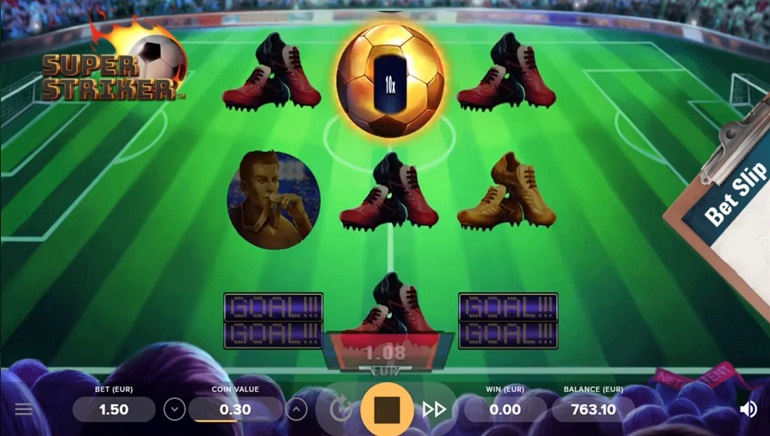 The Soccer-themed Super Striker slot is new from NetEnt. Players can score big wins with a special Bet Slip feature.

Soccer fans will enjoy the new Super Striker slot from NetEnt. It's a 3-reel, 5-line game that hits the back of the net with features such as free spins, and a Bet Slip option that can pay up to 815x the total stake.

Players, balls, GOAL! symbols, and boots land against the backdrop of a soccer pitch. Super Striker uses realistic graphics to bring the excitement of the beautiful game to online casinos.

A Game of Two Halves

While players can land wins in the base games, the bonus features of the Super Stiker slot are where the action is. The optional Bet Slip feature allows them to predict how many times a selected symbol will appear in a certain number of spins. If their chosen symbol lands often enough, they win the top prize.

There is no wild symbol, but Super Striker comes with two scatters. The golden scatter pays out 10x or 20x the stake, while landing the regular and golden scatters at the same time unlocks the multi-level free spins feature. More scatters take players through the levels, with bigger win multipliers in each round.

Those who make it through to the fifth and final round will enjoy a 10x multiplier applied to any wins.

Super Striker is a medium to high variance games, with average returns of 96.04%. It's compatible with PCs and mobiles, and players can spin the reels for stakes between 0.10 and 75.00.

Bryan Upton, NetEnt Director of Games said ''Our unique betslip feature returns with bets crafted specifically for this game which adds that extra reason to play and thrills when those bets come in. Super Striker TM is a classic and simple game that we designed to attract any sports fan – including those new to slots and those looking for something else to do during the bleak sports betting calendar today.''