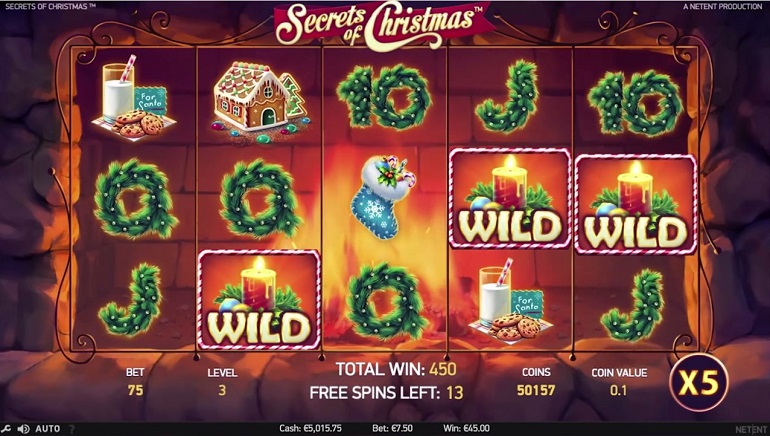 Secrets of Christmas is a brand new slot from Net Ent that's now being previewed before release at the end of November.

It's that time of year again, and online casino games developer Net Ent are already previewing their latest slot, Secrets of Christmas. This is the first time they have released a game designed specifically for the Christmas period as previous titles like Fruit Shop Christmas Edition and Flowers Christmas Edition were just existing games updated with a seasonal twist.

About Secrets Of Christmas

With a standard 5 reel, 3 row layout, Secrets Of Christmas features 25 permanently activated paylines along with a couple of festive bonus features and symbols all in keeping with the theme. The game plays out against a backdrop of a snow covered window, with each pane of glass making up a position on the reels, surrounded by a festive garland of holly. It's very effective and typical of the high standard players have come to expect from Net Ent.

Lower-value symbols are the classic playing card icons, but they have all been given a makeover, with strings of lights and the branches of a Christmas tree added to the design. Bigger wins are made with the appearance of a gingerbread house, glass of milk, stocking and bell, while Santa himself is a wild symbol and the presents under the tree make up a scatter.

This scatter symbol is the trigger for a free spins bonus round, which is preceded by a sequence where players select various presents which will award extra spins or multipliers. with the number of picks determined by the number of scatters that triggered the game. It's all done with some impressive animations that complement a high quality design.

It may not be December yet, but when this game is released on 30th November, across the many online casinos that feature the Net Ent range, it's sure to be an instant hit which players will want to come back to whatever the season.