NetEnt Turns Up the Heat With Hotline 2 Slot 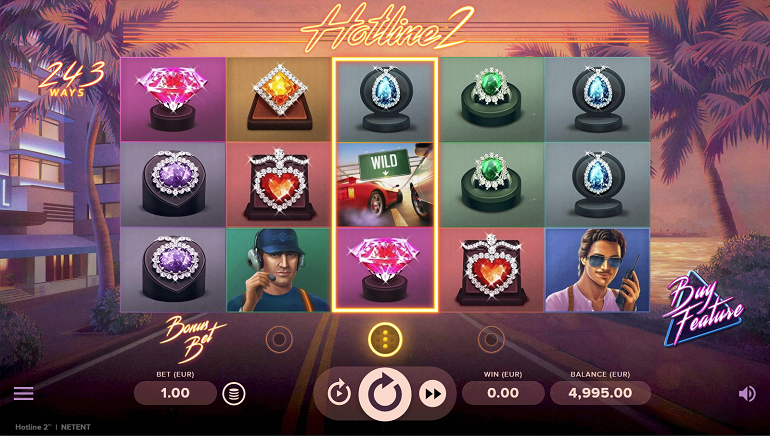 Hotline 2 features graphics and sounds from the original game but brings much more exciting and potential for big wins with the game featuring up to 1,944 win-ways in the bonus.

Following on the success of the original game, NetEnt has launched Hotline 2, a video slot that brings the familiar sound and surroundings but delivers a more exciting gaming experience all around. Featuring the standard 5-reel and 3-row setup, the new Hotline slot offers 243 ways to win in a base game and up to 1,944 win-ways in the bonus feature.

When it comes to the general design, NetEnt hasn't changed a lot. Given the popularity of the original game, the company decided to keep graphical elements in Hotline 2 as well, adding just a bit more color to the whole affair. Players will still enjoy shiny jewelry and fast cars appearing on the reels as well as three familiar characters from the original game keeping them company.

Hotline 2 has also kept the upbeat and exciting soundtrack from the first title. There will probably be no complaints from the players here as the team behind the game has done a pretty good job first time around so no fixing was required.

What has changed is the fact that Hotline 2 features 243 ways to win in the base game. Players can still pick between one, two, or three active reels in the middle, with the wild expanding on every active reel to create bigger wins.

In the bonus feature, wilds landing on active reels don't just expand but also increase the height of the reel up to the maximum of six symbols. Thus, the maximum number of win-ways in the bonus increases to 1,944. When a reel reaches its full height, additional one or two free spins are awarded as well.

Finally, for those who don't like sitting around and waiting for a bonus, there is the new bonus buy feature. Players can pick from three different bonuses, with one, two or all three reels active, with feature buys costing 20x, 40x, and 60x the base bet.