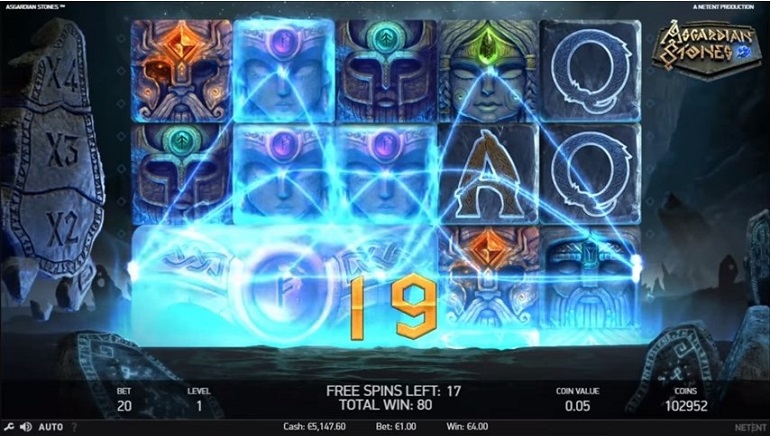 The Asgardian Stones is an upcoming slot that is planned for release at NetEnt casinos in February 2018.

Norse mythology is the reason why Thor, Loki, and Odin have all been able to feature in the Marvel Cinematic Universe. Now, this rich tapestry of myths and legends has inspired NetEnt to create a slot named Asgardian Stones. All shall soon become clear as to the naming of a slot scheduled to arrive at NetEnt casinos on 22 February 2018.

The Asgardian portion of the slot name comes from Asgard being one of the nine worlds found in Norse mythology. Then, the Stones element of the name is drawn from the block-based design of the slot. In Asgardian Stones, the symbols that form winning combos are broken and replaced by others to potentially create chains of winnings.

The breaking up of symbols has been trademarked by NetEnt as the Avalanche feature. Experienced NetEnt players are likely to have already encountered the feature, as Gonzo’s Quest has existed for years as one of the most popular NetEnt slots available at casino sites.

NetEnt has included a further recognisable feature in the form of Colossal symbols, which can break smaller symbols out of the way by landing from above. The Colossal symbols can appear to cover two by two or three by three spaces over the 20 fixed paylines of the five-reel slot.

A major benefit of the Colossal symbols is that they can be used to gain winnings of up to 2,000 times the betting value. On that note, the betting ranges from €0.20 right up to €200.00.

There is also a bonus wheel that can arrive to fill a three by three grid on the slot. After spinning the wheel, it will be possible to for players to claim either free spins or else coin wheels, based on where they land in the mini game. Players can unlock yet more free spins by re-triggering the feature up to 25 extra spins.