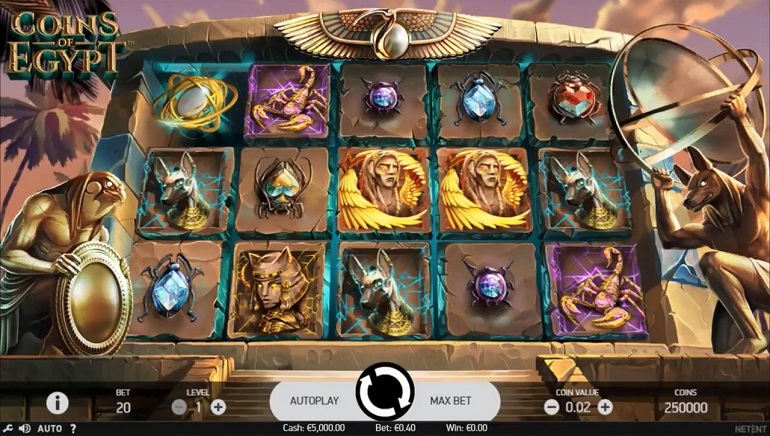 After a period of exclusivity at Betsson Casino, the Coins of Egypt slot machine is being rolled out at all casinos that use software nad games from NetEnt.

Coins of Egypt is a stunning 5-reel, 20-line slot that released at NetEnt casinos on October 8th. This follows a period of exclusivity at Betsson Casino, where the impressive design and features have proved highly successful.

It is, of course, themed around the hugely popular topic of ancient Egypt and comes with classic symbols such as scarab beetles and various Gods. It's also packed with extras, like free spins, wild substitutions and a special Pharaoh Coins feature.

NetEnt have certainly aimed for the top of the pyramid with the stylish symbols and dramatic stone-effect framework to the reels. Statues are seen to either side of the game and palm trees sway gently in the breeze as the reels spin. Five jewelled beetles return the lower-value prizes when they land across a payline form the left side, while impressive images of Gods pay the top rewards.

With each spin, coins valued at between 2x and 15x will appear on the reels. The values of the coins will be added to any wins in the spin, whenever the Pharaoh symbol is also seen on reel 5.

A wild symbol will help spinners to claim more prizes when it substitutes for others, while also being the highest-paying icon, worth up to150x the triggering bet.

The free spins feature begins when a scatter symbol, stops on reels 1, 3 and 5 at once. Coins that appeared in the triggering spin will immediately be added to any of the 3 chests that can be seen in the free games. The Ruby Eagle, Emerald Snake and Golden Cat chests get filled up with wins throughout the free spins round and once one of them is opened up, any coins within are paid out, ending the bonus round.

Coins of Egypt can be played for wagers of between 0.20 and 200.00 on mobile and desktop platforms. The RTP is 96.97%. Coins of Egypt is now being rolled out across the many online casinos that feature NetEnt games.