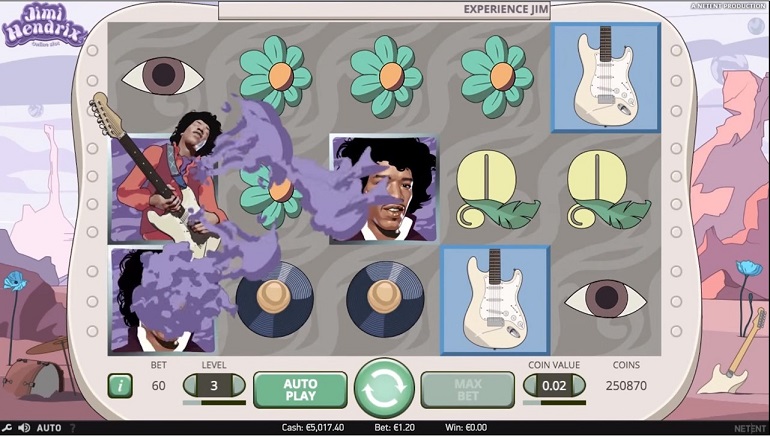 Jimi Hendrix is the second slot to be released in the NetEnt Rocks trilogy. Play it now at NetEnt casinos.

After weeks of build-up, the hotly anticipated Jimi Hendrix slot has at last taken the stage at NetEnt casinos. Launching just a couple of months after the Guns N’ Roses slot, Jimi Hendrix is the second release in a trilogy of music slots that has been titled NetEnt Rocks. Come September, the trilogy will be completed with the release of a Motörhead slot, something we at Online Casino Reports are really excited about.

NetEnt has gone to considerable lengths to create a video slot capable of honouring a musician who is widely regarded to be the greatest guitarist of all time. To that end, the developer’s new video slot has been created and produced under official license with the two Hendrix Family companies tasked with representing the deceased star’s estate.

Having struck official agreements, NetEnt has been able to include some of Hendrix’s most famous songs, including Crosstown Traffic, Foxy Lady, Little Wing, and Purple Haze. And like the Guns N’ Roses slot, this game also lets players to select their own music in what could turn out to a rising trend in the future.

Hendrix was closely associated with the Flower Power era of the late ‘60s and into 1970, which is the year of his death. Within the game, NetEnt was used an array of imagery to evoke feelings associated with seeing the original imagery. Throughout this five-reel slot with 20 paylines, NetEnt has exhibited intricate design work.

Red Guitar Re-Spins will give players an extra spin when four or more red guitars land, with retriggering possible if an extra symbol keeps landing. Another feature is when purple symbols appear to add three extra symbols and show Hendrix riffing on his guitar. Then comes a Pick and Click bonus round and multiple opportunities to trigger free spins.

Jimi Hendrix is out now at NetEnt casinos like 777 Casino, Casino Cruise, and PlayAmo Casino.