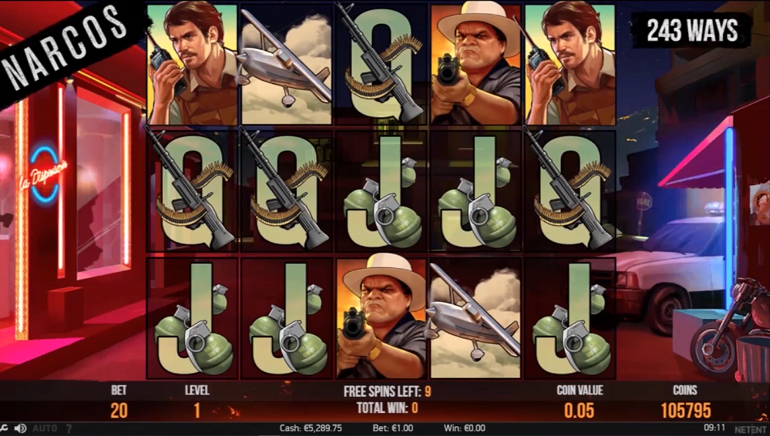 Narcos has now been released as a NetEnt slot, complete with characters from the show and a number of specially made features.

Thursday 23 May 2019 marks a special day for NetEnt casinos, as the iGaming software provider has just completed the release of its brand new Narcos slot. For the uninitiated, the video slot is based on hit Netflix series Narcos, which is a dramatization of the real-life narcotics agents who took down Pablo Escobar.

Narcos is set on the sunny streets of Medellín, the city renowned for cartel activity. Laid over the background is a five-reel slot interface with three rows. The visual style is evocative of the Grand Theft Auto video game series, with a variety of characters appearing as symbols that can be matched for winnings.

After being spun, the reels can have the potential to deliver winnings in 243 ways. These differ from paylines, which are clearly allotted in a specified number of positions across the reels. Conversely, the ways of winning encourage players simply to match the symbols in adjacent three or more reels to earn a payout.

In keeping with the edgy subject matter, NetEnt has devised a number of suitably themed special features. For starters, there is the Drive-by feature, which causes bullets to be sprayed on the screen to target high-value symbols. If those are hit, then they will be suddenly transformed into wild symbols that can substitute for base game symbols.

NetEnt has given the substitute symbols a further purpose by integrating the Walking Wilds feature. After appearing on the screen, the wilds move one space to the left after each spin. This shall then continue until each of the Walking Wilds has left the five reels.

Locked Up and Free Spins

Locked Up is a feature that causes symbols to appear as if they are incarcerated. If three or more Locked Up symbols can be landed anywhere on the screen, then this will cause a random coin win to occur in the player’s favour.

Free spins appear as the final special feature and can be triggered whenever three or more scatter symbols are spun into place simultaneously on reels one, three, and five. Ten free spins will next be awarded and any Locked Up symbols can be held in place until the feature comes to an end.