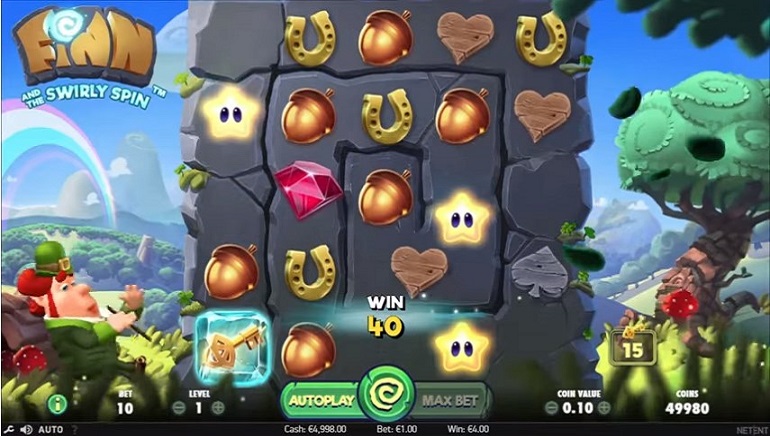 The new Finn and the Twirly Spin slot features a maze-like structure, with symbols moving towards the middle instead of traditional slot reels.

NetEnt has always been known as one of the leading innovators when it comes to casino slots, changing things around and coming up with new ideas to improve the gameplay and make slots different and more enjoyable. Their latest release, named Finn and the Twirly Spin is an excellent example of this approach, as the company has produced a slot that completely does away with traditional reels and introduces swirling patterns instead.

At the outset, players are presented with a maze-like structure containing various symbols, like four-leaf clovers, purple diamonds, acorns, horseshoes, and nicely-stylized wooden heart and spade symbol shapes. The main hero, Finn, stands on the side, celebrating big wins and adding a bit of luck of the Irish every now and then. The entire gameplay is accompanied by traditional Irish music as well, rounding up the experience.

Every round begins with 25 different symbols filling up the slot structure, with the Key symbol situated in the bottom left corner. If three or more of the same symbols line up vertically or horizontally, they'll create a winning combo, pay the win, and then disappear from the screen, with the rest of the symbols moving closer towards the center of the maze. Free re-spins continue for as long as there are winning combinations.

Every win will left behind a Star wild symbol, making it easier to line up more winning combos on the next re-spin.

To get to the bonus feature in Finn and the Twirly Spin, players need to get the key from the bottom left corner all the way to the middle and inside the keyhole. When this happens, you'll unlock the bonus feature.

There are four different bonuses waiting, but to start off, players only have access to one of them. After unlocking the feature four times, the second one becomes available, etc.

All in all, Finn and the Twirly Spinn is an interesting and exciting slot that's well worth trying, especially because of the refreshing gameplay and nice, cartoonish graphics, guaranteeing a lot of fun and excitement. Play it now at NetEnt powered online casinos.