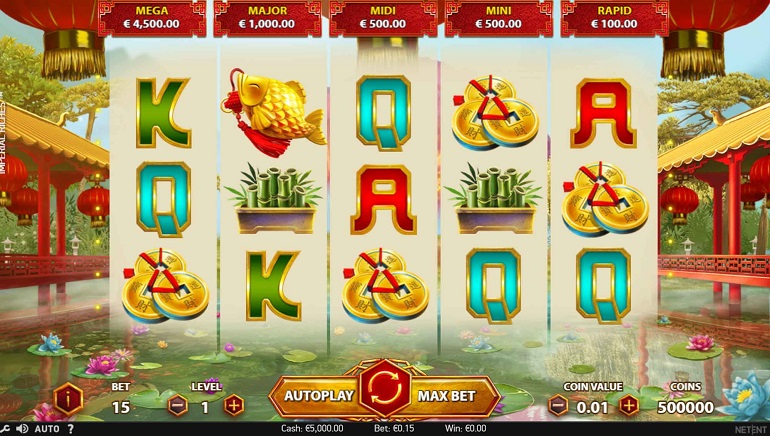 The launch of Imperial Riches marks the return of NetEnt’s Avalanche feature, which is best-known for appearing in the long-running Gonzo’s Quest. The launch was accommodated by a big win, with a player taking home €134,222 on release day.

Participating NetEnt casinos received a brand new game in the form of the Imperial Riches slot. After exploring an entire universe of themes, NetEnt’s latest video slot sees players venture to the Far East in a fresh adventure. On the slot's release day, a player landed a huge win - hitting €134,222.

Imperial Riches plays out in the tranquil surroundings of a luscious Chinese garden. Traditional Chinese imagery is on display as the core symbols that are dropped into place over the five reels and three rows of the slot’s structure.

The base gameplay is primarily driven by the use of NetEnt’s trademarked Avalanche feature. Just like in Gonzo’s Quest, the symbols fall into place. If any of the 15 paylines result in winnings, the symbols in question shall disappear from the screen. New symbols will then fall into space and the feature repeats until no more winnings are paid out.

Instead of free spins, there are Free Falls that can be triggered with the simultaneous landing of three lantern scatter symbols on three separate reels. Three scatters shall deliver 10 Free Falls, four will result in 15, and five can provide the maximum of 20.

Wilds can be used to help build up winnings, while the gems collected on successful paylines can be built up. Once enough jewels have been earned, it’s possible to enter the Lucky Pond bonus game. At this point, either a Coin Fish or Bonus Fish shall appear to chomp on the gems and pay out a reward.

If the Bonus Fish happens to eat three jewels, then this will trigger the launch of the Jackpot Game. This is when the on-screen jackpot tiers of Rapid, Mini, Midi, Major, and Mega come into play. Two are fixed jackpots and three are progressive jackpots. Three matching symbols must be collected for a single jackpot in order to claim the winnings attached.