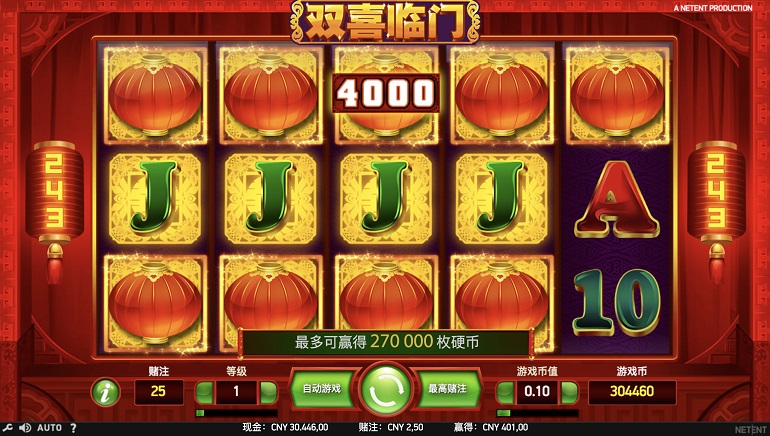 An Asian celebration is in full flight in Twin Happiness, a new NetEnt slot that brings back the developer’s hit Twin Reels feature.

NetEnt has brought out a brand new video slot to participating casino sites. Named as Twin Happiness, the slot game has been designed with the aim of integrating classic NetEnt features with an Asian style that is evocative of the all-consuming celebrations that can be hosted across the continent.

The Twin Happiness displays 15 symbols on every spin, with the images arranged over a grid that’s comprised of three rows and five reels. Playing cards, numbers, and old school slot images appear as the primary symbols that can be matched. However, NetEnt has also included golden Asian imagery and symbols, so as to maintain the style that has been sought.

In the standard gameplay, Twin Happiness can allow for players to match symbols in adjacent reels from left to right. A total of 243 ways to win have been included, with the reels given the striking ability to expand. Among the possibilities are the triple, quadruple, and quintuple symbol arrangements.

Anybody playing Twin Happiness can vary the stakes from the low of €0.25 all the way up to €125.00. As a medium variance slot, there’s the chance to win up to 1,000x times the stake by managing to land five of the high-value ingot symbols at the very same moment.

The system is known as Linked Reels and carries the benefit of matching up identical symbols. For players, this is advantageous because it means they are more likely to secure winnings during play.

Aside from the Twin Reels feature, Twin Happiness is quite a simple slot. In the absence of free spins, the slot can provide wild symbols that are able to land on the second, third, fourth, and fifth reels. With no scatter symbols included, the wilds are capable of substituting for any other symbol in the game.