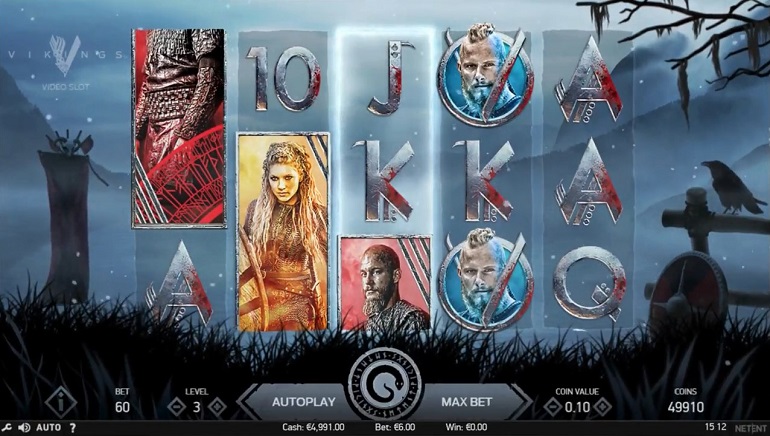 With 256 ways to win in the base game, 78,125 betways in the bonus feature, Hotspot areas, and the Shield Wall feature, the Vikings slot comes with a serious potential for some big wins.

After a long wait, NetEnt's branded Viking slot will be hitting virtual shelves of online casinos today. The hype and expectations have been building for quite a while for this one, ever since the Swedish developer announced back in February that they had acquired all necessary rights to produce a casino slot based on the hugely popular TV series.

All the fans of the series will have no problems recognizing their favorite characters on the reels of the latest NetEnt release. Ragnar Lothbrok, Lagertha, Bjorn Ironside, and the rest of the Vikings are all there, ready to take players on a brand new adventure, the one in which they can actively take part as well.

Reels of this 243-ways to pay slot are set on a backdrop of harsh, snow-covered northern landscape and the gameplay is accompanied by the original series soundtrack and recognizable warrior shouts, which help the Vikings slot really bring the TV show to life on the reels.

The slot remains true to the theme not only in terms of visuals but also in terms of special features. The randomly triggered Shield Wall feature will create a shield wall across the reels, uncovering the same high-paying symbol under all shields.

In the free spins bonus, triggered by landing three or more free spins symbols, the game grid expands and there are 78,125 ways to win active during the bonus. In the middle of the grid, there is a 3x3 Hotspot area, and landing a fully stacked Viking symbol (Bjorn, Ragnar, or Lagertha) inside the area will turn all other Viking symbols into this one, also making them scatters, paying in all positions, regardless of whether they are on consecutive reels or not.

NetEnt has had high hopes for their Vikings slot and initial impression are definitely good. The game is a real masterpiece in terms of sound and graphics and it certainly comes with a potential for some impressive wins. The slot is now available for play across many online casinos powered by NetEnt for all those who would like to try it while it is still hot.