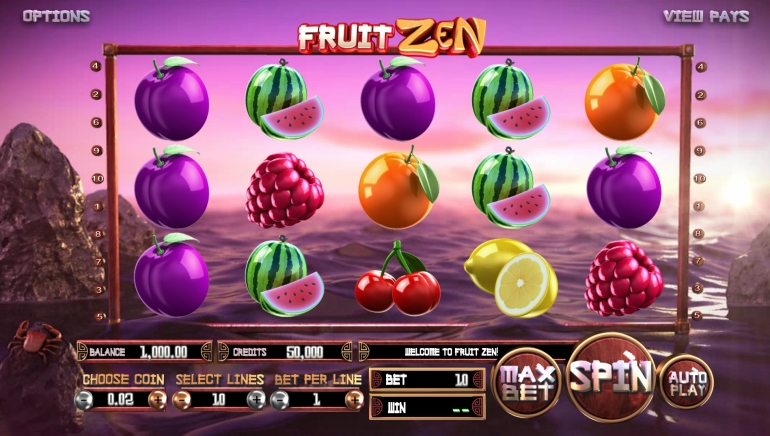 BetSoft Gaming have just released their second slot of the new Slot3 Arcade range. Fruit Zen comes in a 3D effect, and carries the classic symbols of cherries, plums, and oranges, but presents them in a unique style.

BetSoft Gaming has developed a suite of over 150 casino games, and their latest release is the second in a new line of Slot3 Arcade titles. Fruit Zen combines traditional fruit symbols with the latest in cinematic 3D effects.

With a calming background of gently rolling waves, and a distinct Eastern feel, Fruit Zen features the classic symbols of cherries, oranges, watermelons, grapes and lemons that have been found on slots for decades, but here they are displayed in stylish 3D, complemented by the 'Fruit Zen' wild symbol. When this symbol lands on reels 2, 3 or 4, it will expand across the whole reel, sprouting flowers as it does so and triggering a free spin of the remaining reels while the wilds stay in place. This can lead to further wild reels, and more payouts.

Wins pay from left to right, and right to left, for more winning chances, while the player stops the reels spinning with a click, rather than having to wait for them to come to a rest on their own, and with 10 paylines, and coins from 0.02 to 1.00, the bet range per spin will suit any budget.

In common with other BetSoft Gaming launches, Fruit Zen is being released for desktop PC users, as well as in a mobile version at the same time.

Commenting on Fruit Zen, BetSoft's head of product development, Anthony Locke has said ''Fruit Zen is a gorgeous true 3D gaming experience.'' and that  ''It is important to us to develop video slots of all styles, and once again we bring the broadest range of beautifully animated themes to the market.''

Licensed in Alderney, and with fair gaming guaranteed by the TST independent auditors, BetSoft Gaming have released over 150 slots, table and card games, plus Video Poker, lotto games. Keno a 3D virtual racebook and 3D Poker.

The 'ToGo' range of mobile compatible titles has been rolled out since 2012 and runs on iOS and Android devices.

Special Report: Slots Angels is Game of the Week