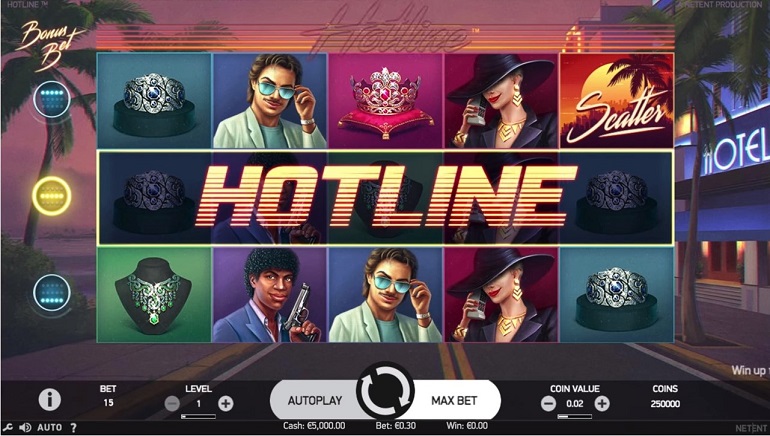 NetEnt is no stranger to developing slots based on popular movies and TV shows, which they've proven once again with their latest Hotline slot releasing today. Although the game's title doesn't contain any references to the popular 1980s series, probably due to copyright issues, graphics depicted in the slot leave very little room for any doubts.

Like with most NetEnt releases, designers did a top job with the Hotline slot. With the reels set on the backdrop of a Miami beach, with palm trees and the sunset in background, the game sets stage for some 1980s action on the reels.

Top paying symbols are represented by three characters, Quinn, Rivera and Kitty Weiss. The resemblance to Miami Vice is uncanny; anyone who has ever seen a Miami Vice episode or knows a little about 80's culture, would spot it right away.

Other lower paying symbols are represented by rich crowns and necklaces spreading across five reels and 30 paylines.

NetEnt has taken things up a notch with their latest slots, introducing fresh game mechanics that we haven't had a chance to see before. The new feature is called Hotline, and that's where the game's name comes from.

In short, the Hotline feature works so that players choose a row that will be hot, and any wilds that land on that particular row will expand to cover the entire reel. Expanded wilds will also be held in place for a free re-spin.

During the free spins feature, all expanded wilds will remain in place for the duration of the bonus, which promises a lot of action on the reels and creates potential for some seriously big wins.

If this isn't enough, players also have a chance to activate the Bonus Hotline Bet. By paying more for a spin, players can activate one or both additional rows, for more expanding wilds and more chances to win big.