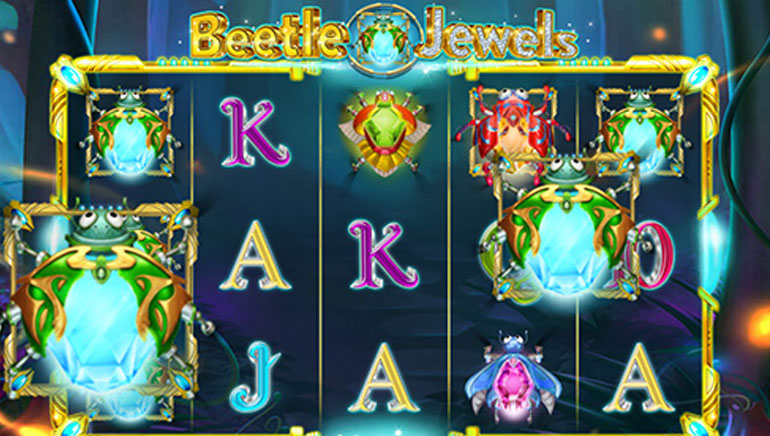 Beetle Jewels is the latest slot from iSoftBet and their first to be developed in HTML5 format for play across all platforms.

It's the first game from them to be produced in HTML5 format using the open-source TypeScript language, which iSoftbet are rolling out across their existing range to give players enhanced versions of all games.

Set in a magical forest, the colourful beetles are joined by the playing card symbols 9 through to A, and in normal play, wins are created by lining 3, 4 or 5 of the same type across any line. The top-value beetle will be worth up to 500x the stake when it stops in the right places.

Bonus features are triggered by the blue beetle, which is both a wild and scatter, substituting for others to create extra wins and launching 10 free spins when it appears in any 3 or more positions at once.

During the free spins, above the main game is a single symbol that can transform others into winning combinations, without needing them to be on adjacent reels. These can fill much of the game for some potentially big payouts, and landing 3 or more scatters throughout will retrigger a further 10 free games.

Nir Elbaz, Managing Director at iSoftBet, has said of the new release: “Packed with many exciting features, with the likes of Free Spins, Expanding Symbols and Non-Adjacent pays, Beetle Jewels takes players on an ultra-exciting ride and offers them fantastic winnings.”

He continued by saying “The strategy of releasing new games regularly hasn’t derailed us from producing high-quality content, and the launch of Beetle Jewels validates that. The feedback we’ve received so far has been good, and we’re looking forward to seeing Beetle Jewels perform across all operators.”