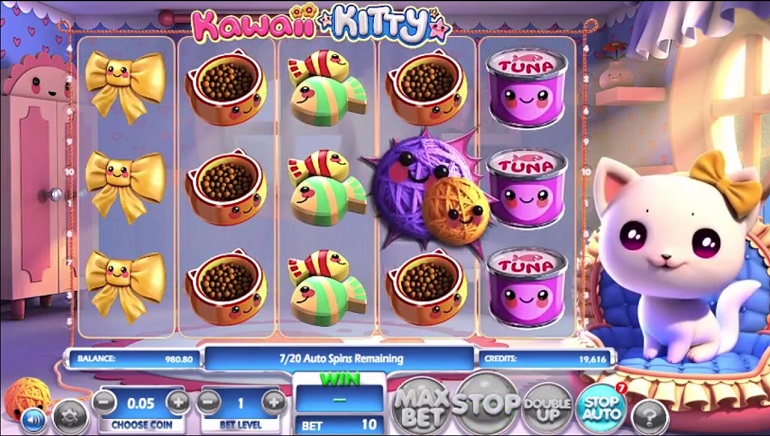 Betsoft Gaming had cat-lovers in mind when they created their newest 3D slot game, Kawaii Kitty. Kawaii is Japanese for cute, and slots-players will certainly get their dose of cute when they play this new release from Betsoft.

Betsoft Gaming had cat-lovers in mind when they created their newest 3D slot game, Kawaii Kitty. Kawaii is Japanese for cute, and slots-players will get both a dose of cute and of Japanese animation when they play this new release from Betsoft.

Kawaii Kitty has ten paylines, five reels, and a maximum wager of ten coins per payline. Other than cuddly kitties, its main appeal lies in its bonus game, expanding wilds, and jackpot cash prize of 500 coins. There are no free spins or scatters in this slot, which makes it simple and straightforward - perfect for newbies - but the game does pay both ways, which makes it easier to score winning combinations.

Symbols are what you would expect in a cat-centric game: milk, a can of tuna, a hairbrush, cat food, a bowtie, yarn, and some fun little cat toys.

The yarn symbol is the wild in this game, which expands to cover the whole reel when it appears together with three or more of the same symbols. When this happens, two little balls of yarn knit out the world WILD down the reel, and the paylines are recalculated, this time including the wilds. The Expanding Wilds also offer a re-spins feature that allows multiple re-spins in one session.

If you’re feeling risky and lucky you can click on the Double Up feature icon and choose to gamble half or all of your total winnings. Your luck will be determined by the flip of a coin.

Betsoft Gaming is known in the online gaming industry as the leader of true 3D cinematic gaming. Their game library currently consists of over 180 games, including their popular video slots series, Slots3. Betsoft serves a wide range of clients, including some of the top gaming operators in the industry.

Players can expect to fimd Kawaii Kitty at Betsoft powered casinos the likes of Playamo Casino, SlotJoint Casino and VegasCasino.