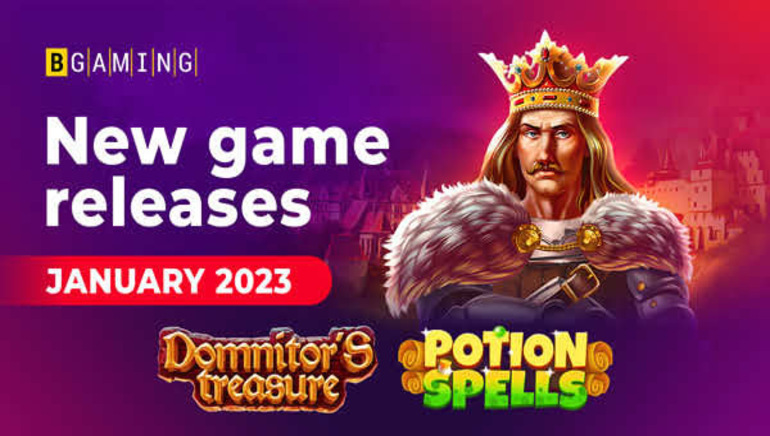 BGaming is releasing two new slots this January: Potion Spells and Domnitor’s Treasure Hold & Win. Both are packed with exciting features and display intriguing graphics — and at the same time, they are so different that players will have no lack of variety in the New Year!

Potion Spells is a 7x7 grid that includes wilds, big symbols, a Progress Bar, and much more. Players spin the reels and form wins when five or more of the same symbols line up in vertical or horizontal clusters. When a winning combination is formed, the winning symbols disappear and the empty spaces are filled with new symbols that drop from above.

There are also backlit symbols, which is when a random low-value symbol starts shining. If backlit symbols form a winning cluster, they disappear and are replaced by two wilds. Every spin that doesn’t result in a win can end up with random symbols turning into wild symbols, which can offer another chance at a win.

Free Spins are triggered when three scatters land on the reels. Players initially get five free spins, but more can be triggered. During the free spins round, the four middle reels combine so that a 3x3 giant spinning symbol can take part in wins and pay out the equivalent of nine of the same symbols.

BGaming’s popular Hold & Win mechanic is triggered when six or more coin symbols land on the reels at the same time. When this happens, players are taken to a bonus game during which they are rewarded for every coin symbol that drops. Each coin symbol comes with a different multiplier value, up to x20 the bet. Players that collect 15 coin symbols win the mega jackpot, a whopping x5000 the bet.

BGaming is a Malta-based online gaming software developer that has a portfolio of more than 90 games and more than 700 partners around the world. BGaming is constantly introducing new and exciting innovations, which is why it has enjoyed global growth and popularity.