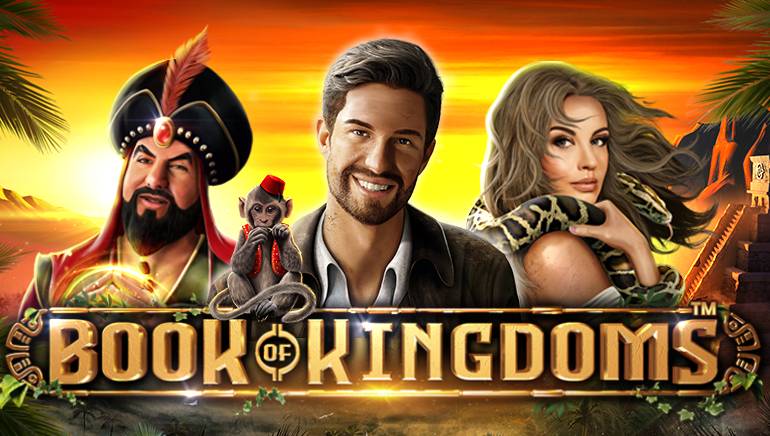 The Book of Kingdoms slot comes packed with superb graphics, 25 paylines across five reels, two bonus features, and the maximum win of 20,000 times the stake,

The development team working behind the scenes has done a great job with the Book of Kingdoms slot. Featuring sharp colors and high-quality graphics, the game transfers players to a lost city in the middle of a desert, setting up the scenery.

Symbols on the reels go along with the main theme. The explorer is the highest paying symbol, followed by a mystic and a tempting sorceress. The book symbol appears on reels 1, 3, and 5 and it serves as both the wild and the scatter symbol. Three books landing on the reels trigger the free spins round.

At the start of the free spins round a random symbol is selected as an expanding symbol for the duration of the bonus. Players are awarded five free spins to start with but landing three more books will award additional five spins.

Book of Kingdoms features another bonus game triggered by landing five or more silver coins on a single spin. This initiates the re-spin feature, where players try to land even more coins. At the end of the round, all money values are added together. During this bonus, it's possible to win one of three fixed jackpots, worth 30x, 100x, and 1,000x the base stake, respectively.

With medium volatility, RTP of 96.69%, and the maximum win of 20,000 times the stake, Pragmatic Play's Book of Kingdoms is likely to create some interest with the players. While the slot doesn't bring that much new in terms of features, its superb design, smooth gameplay, and top-quality sound that adds to the overall atmosphere make it well worth a try.