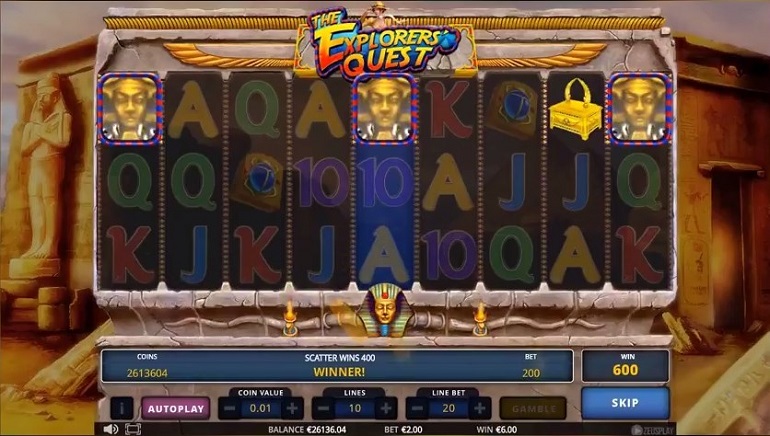 The Explorer's Quest slot, from Bulgarian games developer Zeus Play, comes out on 18th May and will introduce players to a unique Shared Reels feature.

The Explorer's Quest is the latest slot from Zeus Play and sees the introduction of the Shared Reels feature, which creates wins from either side of the game. Themed around the classic ancient Egyptian tombs, but with a sci-fi twist, it also comes with a treasure hunt bonus game and free spins.

As the game is loading, there's an animated sequence that sets the scene, where flying pyramids add a sci-fi touch and the action then jumps to 1885, where explorer Vanessa Goldhope finds an important artefact. Once the game has opened, players will see 9 reels lined up across the screen, along with 10 paylines and symbols lined up over 3 rows.

The unique Shared Reels feature gives players the chance spin up winning combinations from the left and right.

Alongside the playing card symbols, there's Ms. Goldhope, precious treasures, the mysterious Nerul and his box of tricks that can spin up bonus wins.

He also triggers a side game, which spins up multiplier prizes, while landing any three or more Nerul symbols will take players to a free spins bonus round.

Before the spins begin, a Sarcophagus round has a mummy picking cards and awarding up to 20 games. During these, feature triggers can occur over and over until a maximum of 500 free spins have been played.

Based in Bulgaria, Zeus Play has a rapidly-expanding range of slots and table games that can be played across mobile and desktop platforms with no download needed. The white-label games can be integrated into the ranges of many online and land-based casinos.