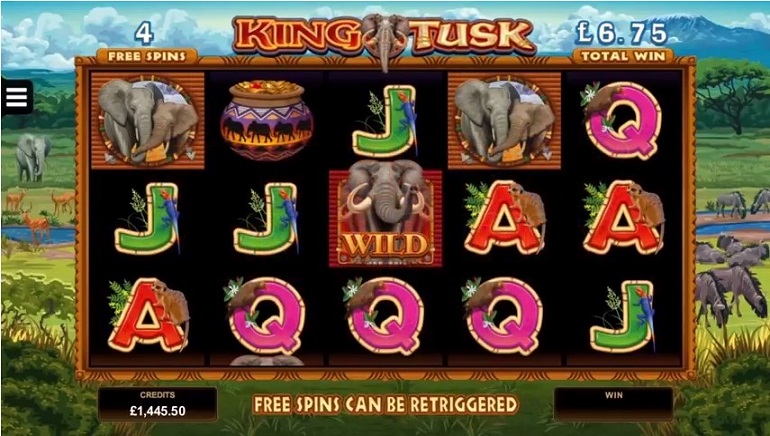 The King Tusk slot machine stampedes into Microgaming online casinos today, bringing with it some elephant-themed symbols and a series of free spins bonus rounds.

This slot’s got cartoon style characters and lower-value playing card symbols decorated with colourful creatures from the African bush.

King Tusk himself is a wild symbol who can act as all but the scatter and complete winning combinations, expanding across any reels he lands on to make this task even easier. It's also possible for any random symbol to transform into an additional wild icon. This slot has some mammoth bonus games triggered by the game logo, which is a scatter symbol, so can appear in any positions.

Players get to choose either the Elephants Gone Wild feature, where all character symbols are wild, the Stampede games in which two random reels are wild in each bonus spin, or the Dancing bonus games, where wild symbols are added in each spin and stick around for the following 5. Each free spin round lasts for 10 games, and can be retriggered by more scatters.

There's a choice each time the spins are triggered, but players won't need to multi-tusk, as a  simple pick is needed to start the rounds.

What Microgaming Said about King Tusk

David Reynolds, Games Publisher at Microgaming has said of this new slot machine, ''Player choice is at the heart of King Tusk, a graphically rich slot inspired by the majestic creatures that roam the African plains. This game has a wide range of free spins variations for players to choose from, each with its own unique take on wilds to bring players amazing new ways to win!''